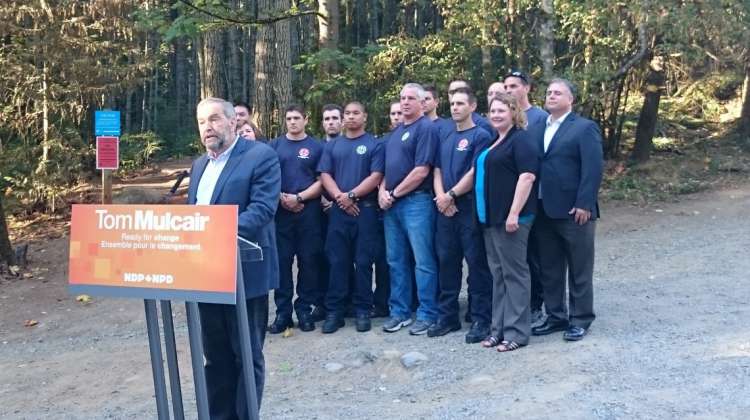 Mulcair says the NDP would restore $7 million dollars in funding to the Joint Emergency Preparedness Program, and invest in training programs formerly provided by the Canadian Emergency Management College.

Mulcair says the NDP would also make sure provinces and territories have better access to financial aid in case of a natural disaster.

Mulcair also brought his “Campaign for Change” to Parksville earlier today, and will be in Courtenay tonight, with local NDP candidate, Gord Johns.

“Clearly Mr. Harper’s plan isn’t working and it’s why more and more Canadians are looking to the NDP to bring change in Ottawa. We have the team to do it.”

“As a successful community and business leader, Gord has worked hard to help his community get ahead. Now, he is ready to use that extensive experience to deliver results for Vancouver Island as an MP,” said Mulcair.

“Voters on Vancouver Island are ready for change and we’re ready too,” said Mulcair.

Mulcair isn’t the only leader on the Island today…The Green’s Elizabeth May was in her Saanich Gulf Islands riding to unveil the party’s policy on pipelines and tankers.

Political analyst and former Vancouver Island University prof Allan Warnke, says we should expect the leaders to pop in-and-out of the region a lot in the coming weeks.

But, Warnke also says despite the potentially decisive role for BC in the October vote, the most important battleground remains southern Ontario.

That’s where Liberal Justin Trudeau is spending the day. Conservative Stephen Harper is sticking to Ontario today as well.

(Photo of Mulcair in Nanaimo today)