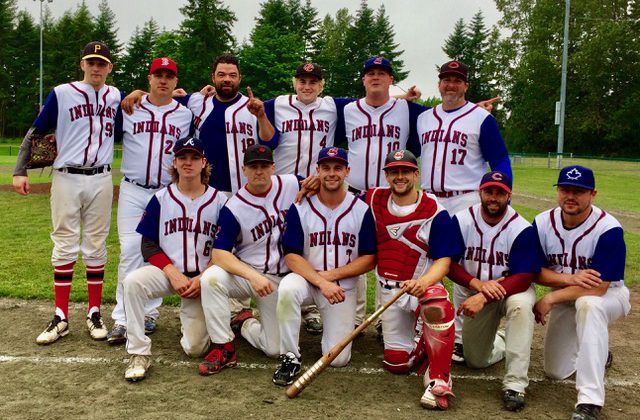 It was quite the weekend for the Happy’s Source for Sports Indians baseball squad.

Both the 19+ and 40+ men’s teams came away with gold at the annual Yew Bat Tournament.

12 men’s teams were at Bill Moore Park in Courtenay over the weekend. Teams from across Vancouver Island and Vancouver hit the diamond as part of the 8th annual event.

In the 40+ division, the Indians were the defending champions. Looking to repeat, they rolled through the round robin stage led by strong offensive performances from Jerry Williams (.714 avg), Don Smalley (.538 avg) and Jeff Murray (.500 avg).

In the finals, the team met the Burnaby Buzzards. They started strong after a 3-run homer by Joe Murray in the 1st inning. The Indians’ pitching staff (Jerry Williams 3IP, Randy Alexander 2IP and Andy Marinus 2IP) held off Burnaby’s offense and only allowed 2 runs. The final score was 5-2 for Happy’s.

The 19+ division was a little bit more of a challenge for the Indians, but the team pulled through and made their way to the finals. In between them and a championship was the Victoria Mavericks.

A much-anticipated rematch from last year’s finals, the Indians were out for revenge after losing in the championship game in 2016.

The Mavericks scored 2 runs in the top half of the 1st inning and the Indians replied with 1 run of their own as Nate Easterbrook (1-3, 1RBI) singled home Chris McKague (2-3, 2B). The Indians tied it up in the 2nd inning after Tim Parsons (1-1) singled following a Dennis Barna walk, Wyatt Strachan (1-2, RBI) singled in Barna to tie the score 2-2.

The Mavericks scored one run in the 7th but it wasn’t enough. The Indians held on to the lead and finished the game with a 4-3 win to claim the 2017 Yew Bat Tournament championship.