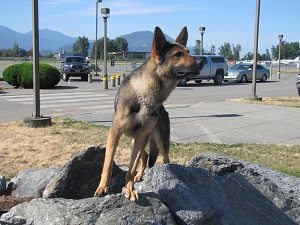 A man from Courtenay is facing numerous charges, including attempting to kill or maim a police dog, after being picked up by police in Chilliwack.

Police were called out to a report of a stolen truck.

A 26-year old woman was arrested while another occupant from the truck fled the scene.

A police dog picked up the scent and tracked the suspect down toward the river.

As the dog got close, the suspect moved to deeper water and allegedly tried to drown the dog in order to escape.

The suspect was arrested by police and linked to what Mounties describe as a violent crime spree.

The 38-year old is facing charges including attempting to kill or maim a police dog.

A 25-year old man from Chilliwack was also arrested in connection with the investigation.

The police dog is back on duty.