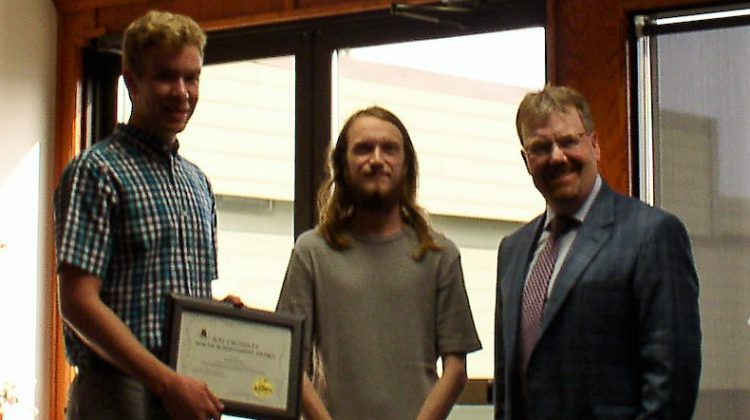 Five Comox Youth have been recognized for their community service with the 2017 Ray Crossley Youth Achievement Awards.

The awards are named after former Town Councillor Ray Crossley, who was an advocate for youth in the community.

Councillor Hugh MacKinnon says the committee receives numerous nominations each year and then short-lists for the final recipients.

He says it’s always a tough decision, because of the high level of talent and community involvement demonstrated by students in Comox.

“We are in good hands, passing the torch to the next generation, and I don’t think that message gets out enough to our community,” says MacKinnon. “We’ve got a wonderful group coming up in the next generation and that’s certainly what Ray Crossley thought of our youth.”

Ethan Tansky – Ethan was nominated based on his leadership skills and academic and athletic success. He has demonstrated outstanding leadership with the Grade 6/7 leadership group such as hosting aboriginal educational learning experiences, and bringing storytelling to the classroom. Athletically, he placed 1st in the District Track meet in the 100 and 200 metres. His leadership will be sadly missed at Aspen School but will Highland Secondary’s gain.

Judd Foster – Judd represented Highland Secondary at the Skills Canada competition in Electronics and won the Gold medal in his competition, an amazing result and will go on to represent Canada at the World Skills competition in October.

Lizzie Gummer – Lizzie has been ranked the Top in Canad Under 20 Female Track and Field Hurdler. She was again an Island champion in the hurdling events, a silver medalist at the B.C. championships in the 100 metres hurdles. Liz was offered and has accepted an academic and Track and Field scholarship to prestigious Harvard University.

Taylor McEachnie – Taylor is an extremely compassionate, hardworking and thoughtful individual who made positive contributions to her school and local community on a daily basis and was this years recipient of the prestigious Highland Service Award. She was a Rotary Interact Club leader, Peer Leader, Grad Committee chair and mentor to younger students. In the community, Taylor volunteered with the Salvation Army, organized food drives through ‘We Scare Hunger’, delivered Christmas Hampers, and organized Mental Health Awareness events. She answers the call of helping others in need and feels it a great honour to do so.