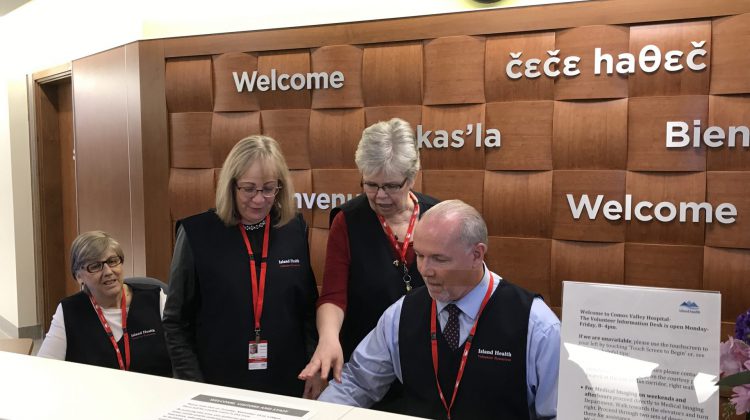 British Columbia Premier John Horgan was on hand for the official opening of the new North Island Hospital Comox Valley campus on Tuesday.

He says residents across the region will be able to benefit from more surgery space and larger patient rooms. The North Island Hospitals Project cost over $600-million.

The Provincial government covered 60% of the cost, while the Comox Strathcona Regional Hospital District covered the remaining 40%.

NIHP (North Island Hospitals Project) Chief Project Officer Tom Sparrow says the facilities, both in the Comox Valley and in Campbell River, are top-notch. However, he notes there are still some concerns about the helipads at both campuses.

“That is definitely something we’re presently working on. They are not fully certified. We’re waiting for Transport Canada to provide us with full certification and we hope to have that within the next month.”

The issue at hand is that the helipads have H1 certification, which limits the number and types of helicopters that can land at the hospitals. In the contract between the North Island Hospitals Project and Comox Strathcona Regional Hospital District, it was agreed that the helipads would receive H2 certification.

Sparrow says, “in the future, we need to work more closely with our partners at Transport Canada to ensure some of these processes are dealt with well in advance. The heliports should be fully operational and we hope to see that very soon.”

Premier Horgan says that, “if by chance, they rule against the configuration as it exists today, we’ll find other mechanisms to make sure that health care is not compromised. I’m hopeful that Transport Canada will find this in favour of the two hospitals and the plan that they have in place, but if they don’t, there are secondary plans and we’ll implement those.”