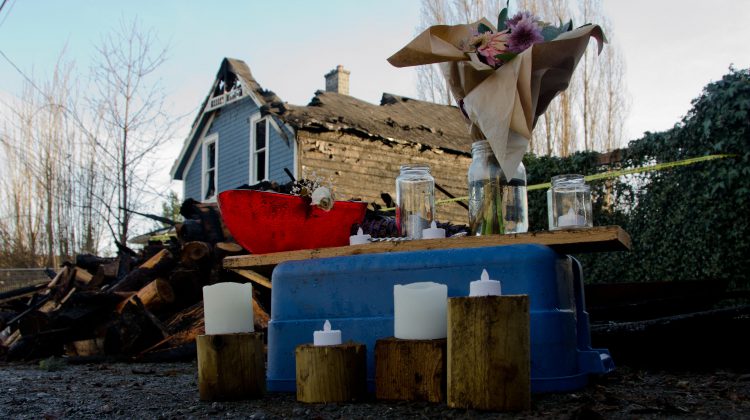 A memorial stands outside a destroyed home on Penrith Avenue in Cumberland on December 12, 2017. The home burned to the ground on December 9, damaging two other nearby houses. The homeowner was later found deceased in the rubble. Photo by James Wood/98.9 The Goat/Vista Radio

CUMBERLAND, B.C- The community of Cumberland is rallying to raise money for families driven out of their homes by fire.

On the morning of December 9, a fire broke out at a home along Penrith Avenue, close to the centre of the village.

The flames consumed the house where the fire started, spreading to the nearby houses on either side.

The house to the east of the fire’s starting point lost its roof, as well as the house to the west. Two cars parked nearby also caught fire, with hydro lines overhead being “burnt off”.

The owner of the house where the fire started was later found deceased in the collapsed structure, and two families have been forced out of their homes due to damages from the flames.

Since the fire, businesses and individuals in the village have been collecting funds and donations for the displaced families. One business collecting is the Cumberland Esso station, with a cash donation tin set up on their front counter.

According to Diane McEwan, the manager of the gas station, over $300 has been raised so far. She said the displaced families were also regulars of the store.

“Everybody knows everybody in Cumberland.”

There is no time limit on the Esso donations, and McEwan indicated there had never been any discussion as to how long it should run.

“As much as the community wants to give to help these guys out,” said McEwan.

“It’s a terrible thing that happened, and Cumberland is a wonderful community.”

In addition to the Esso donations, a trust account has been set up at the local First Credit Union branch.

According to Cumberland resident Heather McLeod, those looking to donate to the account can deposit cheques in person to the account, or mail them to the bank.

The name of the account is the “Penrith Avenue Fire Victims Trust”. If those looking to donate want their funds to go towards a specific
family, they can make a note on their cheque or instruct the teller while depositing.

The list of families, as supplied by McLeod, is below.