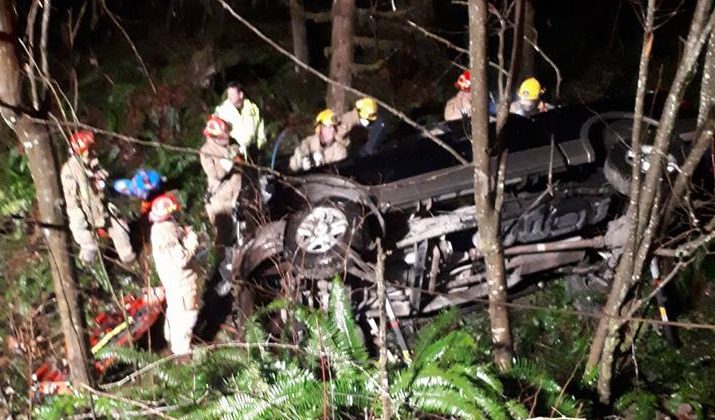 Firefighters respond to the rollover along Strathcona Parkway on Sunday night, after a truck rolled down an embankment. Photo by Eric Brassard.

COURTENAY, B.C- Two women are in stable condition, after their truck rolled down a short slope at the bottom of Mount Washington on Sunday night.

According to Courtenay Fire Chief Don Bardonnex, firefighters got the call just after 6:30 p.m. A pickup truck carrying two women had gone over the edge of a 15-foot embankment along Strathcona Parkway, just east of the mountain’s bottom parking lot.

The rough area of the crash. Image sourced from Google Maps.

14 firefighters responded to the scene, along with one fire engine and the department’s rescue truck. The truck had landed on its side, trapping the two women inside the vehicle. They were eventually cut out, and taken to hospital, after rescuers took them up the slope with stretchers on ropes.

Bardonnex said he believed the pair are in stable condition. He also had advice for drivers planning to use the mountain routes.

“The road last night wasn’t icy or slippery, but it’s going to get that way,” said Bardonnex.