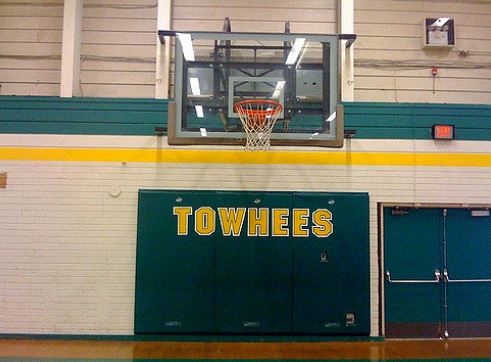 The squad finished third at the December 14th-16th event.

“It was a fun tournament for the Towhees since we got to see six of the Island’s best 3A schools, and how we shape up with them,” said head coach Larry Street.

In game one, the Towhees faced Royal Bay from the host city.

Royal went 4-for-29 from behind the arc, while Vanier kept the ball inside. The Towhees drew 37 fouls against Royal Bay, but missed 19 from the charity stripe.

However, the nail-biter came out positive for Vanier. They won 68-67.

“A close game, and a good indicator of what is to come when playoffs come around,” said Street.

Levi Timmermans finished with 26 points and 14 rebounds, while Kyle Piercy had 19 points. Riley Meyerhoff dominated the boards with 18 rebounds and 8 points.

Game two was against Wellington, who the Towhees will face on December 19th in Nanaimo. Some of Vanier’s top players got into foul trouble, which deterred the Courtenay team from a win.

Wellington came out on top 71-66. Kyle Piercy finished with 21 points for Vanier.

History was made in the final game of the tournament. Vanier matched up against fellow Comox Valley team, the Isfeld Ice. It was the first time Vanier had played the Ice during Isfeld’s existence.

Street said that, “players on both teams enjoyed playing against long time friends and this will carry on to the big league game they play on January 30th at Vanier.”

The Ice were up by two at half-time, led by Thaskani Mtawali, The mid-point break must have helped the Towhees, as they came out into the second half with much stronger defense to slow down Isfeld. Vanier won 69-54.

Kyle Piercy has 21 points, 9 rebounds, 5 assists and 5 steals. He was named Player of the Game. Levi Timmermans added 19 points and 9 rebounds.

Wellington went on to defeat Reynolds 70-55 in the final to win the tournament.

Timmermans was named to the tournament’s All-Star team, along with Isfeld’s Thaskani Mtawali and Jonah Shankar out of Carihi in Campbell River.