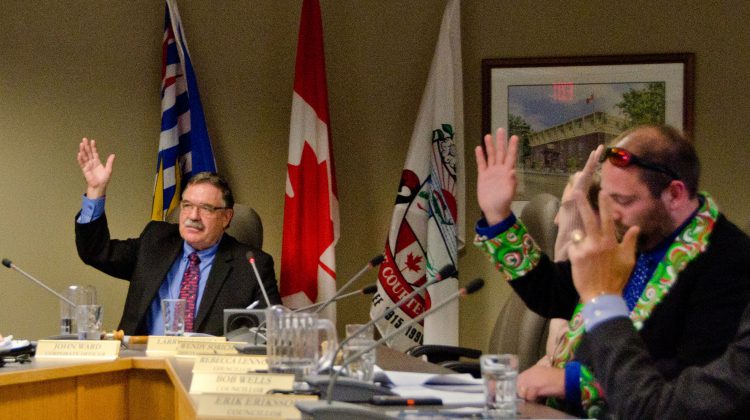 COURTENAY, B.C. – The City of Courtenay will be taking a look at the use of wood stoves for home heating in the city.

During Monday night’s council meeting, Mayor Larry Jangula brought a motion aimed at offering residents an incentive to improve their wood stoves, due to their impact on air in the city.

In the language of the motion, Jangula stated air quality in the Comox Valley is a “major issue” for residents of Courtenay, getting more acute in the winter months. The city has also been identified as one of the top ten communities in British Columbia for pollution linked to wood burning, with a correlation to heart attack admissions to hospital.

While the city has been working with the Comox Valley Regional District (CVRD) on programs allowing for wood stoves to be exchanged, only four applications have come from Courtenay homeowners out of the 71 submitted.

The mayor’s motion was aimed at speeding things up. To that end, he asked for the implementation of a two year program to update all wood stoves in the city to current usage and emissions standards governing the devices, as well as offering an interest-free loan to homeowners who needed assistance to make a switch or upgrade their stove.

The motion also stated that homes sold in the city with wood-burning appliances should conform to the latest standards, or be replaced with a “compliant model”, while calling for regulations and guidelines on what kinds of fuels can be burned in Courtenay.

Speaking after the motion was approved by council, Jangula said a total ban on woodstoves would have been “too harsh” , and hard for people who couldn’t afford to make a transition.

According to the mayor, areas in Courtenay around Willemar Avenue and Lake Trail Road were found by Island Health to have the worst air in the city. While he acknowledged that air issues in the Comox Valley were not entirely caused by Courtenay residents, he thought the community could act as an example.

“The one thing we can do is try to clean up our own act, so to speak,” said Jangula.

As for the possibility of barring woodstoves from being included in new developments, Jangula indicated it wouldn’t have a huge impact on Courtenay.

“That’s a discussion that we can make at a future date,”

“That’s a thought. Very few, almost none of the new houses have (wood-burning) stoves in them.”

The motion has been referred back to municipal staff for further study.