Cause unclear after Christmas Day fire in Courtenay 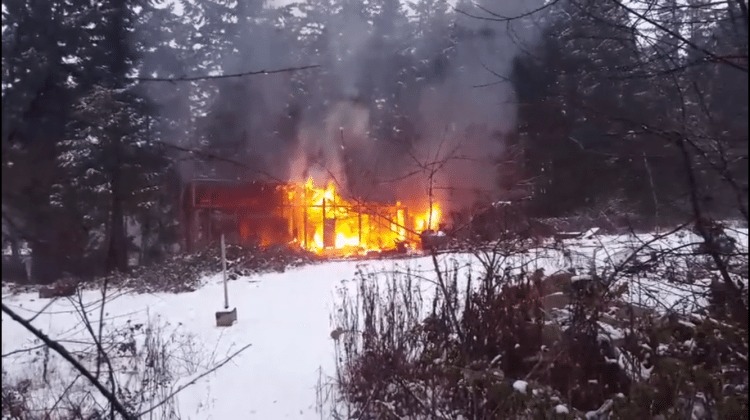 A vacant structure on Piercy Avenue burns on Monday, Dec. 25th, 2017. The cause of the fire remains unknown. Image courtesy of Patrick Parish.

COURTENAY, B.C- A pillar of smoke went up in Courtenay on Christmas Day.

According to Courtenay Fire Chief Don Bardonnex, a call came in to the fire department around 4:16 p.m. on Monday afternoon, after a vacant building at the end of Piercy Avenue caught fire.

As of Wednesday morning, the cause of the fire remains unknown.

Multiple propane tanks were found near the structure, but Bardonnex said that none were venting when firefighters arrived on scene.

No one was located on-scene, but two mattresses were found inside the vacant building. Bardonnex also told 98.9 The Goat that the people who were in the building likely did not own the structure, or the lot it was located on.

A total of 12 firefighters, one fire engine and one tanker truck responded to the scene, extinguishing the fire. As of Tuesday afternoon, the remains of the building are still on the lot, surrounded by what appeared to be articles of personal property.

Bardonnex asked for anyone with information about what took place to get in contact with the fire department.

No injuries were reported from the fire.