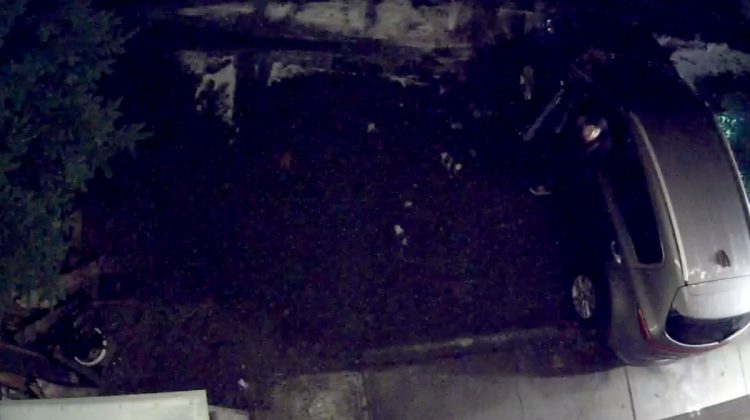 A photo of the alleged car-rummager, taken from a video posted to a Facebook group known as police scanner courtenay / comox valley by Cara Oh. Image courtesy of Cara Oh.

COURTENAY, B.C- A Courtenay resident wants to know who went in her car.

Cara Oh lives in the west-central part of Courtenay, and has a security camera stationed above her residential parking spot each night. On Thursday, after she headed to her car in the morning to start it up before work, she noticed her door was “slightly ajar”.

“When I opened the drivers side door, I saw that my glove box was open, my centre console was open, and the spot that holds sunglasses was open and there was garbage thrown all over the two front seats,” said Oh.

“After cleaning up the garbage and trying to see if anything was taken, I noticed that the (work) bank card that usually sits in the centre console was missing.”

After contacting her work and letting them know about the theft, Oh told 98.9 The Goat she called the RCMP to report what had happened. According to Oh, the card will be useless, due to it’s lack of tap purchasing and the apparent thief not getting the PIN.

She said she reviewed the Wednesday evening security footage after she got to work, and saw her late-night vehicle visitor on camera, crawling inside her car after opening the door.

“He immediately turns off the interior light and looks through my car for anything he can steal,” said Oh.

“Nothing from the back seat was taken, nor the trunk. And I didn’t have anything of value in the car. Near the end of the security video, as he’s getting out of my car, he looks up. Normally I’m really good about locking my car doors, but last night I guess I didn’t hit the lock button twice.”

Oh later posted the footage to a local social media page, with the intention of giving a “heads-up” to other Comox Valley residents. She’s also looking on the bright side.

“So technically, he ended up leaving something worth more than what he took.”

98.9 The Goat has reached out to the RCMP for comment, which will be added to this story once it is received.