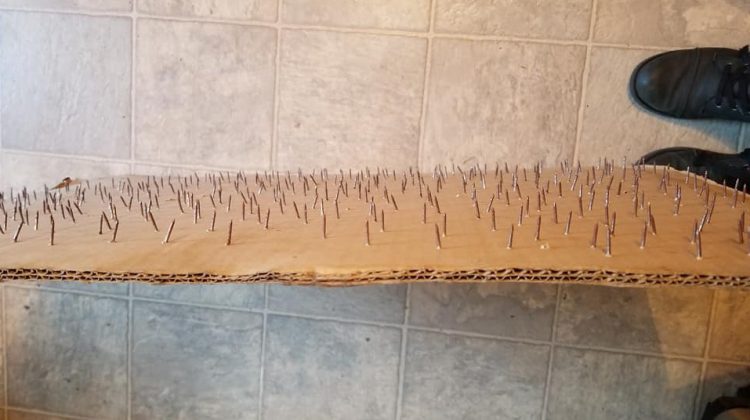 A photo of the nailboard found in the Mission Hill area on Dec.30. Image sourced from Facebook.

COURTENAY, B.C- Police are looking into a report of a nailboard found in Courtenay’s Mission Hill area.

The finding was first mentioned in a post made to local social media on Dec.30, which had stated the board was found along a snowy road in the area.

98.9 The Goat reached out to the author of the post, who declined to comment about the finding. However, they did indicate that the board was found at the top of Mission Hill.

A complaint about the board has now been made to the Comox Valley RCMP, with officers being notified on Jan.2 in the afternoon.

“The complaint was received several days after the item was located,” said Constable Rob Gardner, spokesperson for the detachment.
Gardner encouraged residents to report issues to the police when they occur.
“We are very limited with our investigation days later,” said Gardner.
If anyone has information regarding this, they can contact the Comox Valley RCMP at 250-338-1321 and cite file 2018-81.