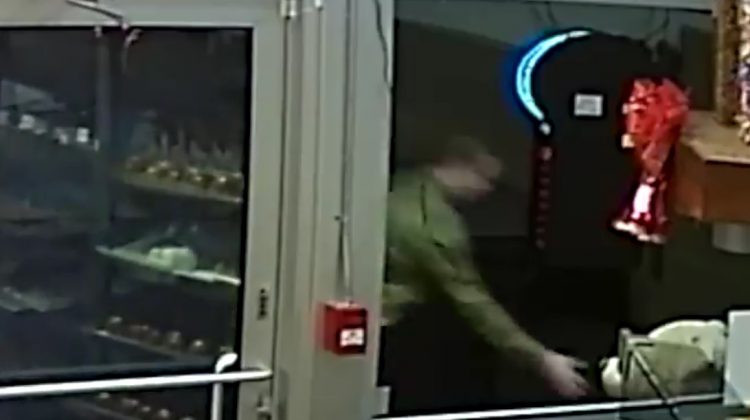 An image from the security footage posted by the store. Sourced from Rocky Mountain Chocolate Facebook page.

COURTENAY, B.C- A local chocolate shop wants their bear back.

According to the supervisor of Rocky Mountain Chocolate, Ceara Hodges, a large stuffed bear was stolen from the front door of the shop on Saturday evening. Hodges had been closing up the store when the theft took place.

The apparent culprit, a man dressed in a green shirt, was walking by the front end of the store before swiping the bear (named Truffles) from the sidewalk.

“Just as I turned my back to rinse out the mop head, somebody just ran by the front of the store and nicked the bear, and ran out of sight,” said Hodges.

The store has since posted a “Have You Seen This Bear” notice to their Facebook page, as well as security footage of the theft. “He’s always been part of the store,” said Hodges.

“He’s just this huge, big fluffy, stuffed bear, and just kind of a big friendly face you see every time you walk by. Now he’s gone.”

“It might just be somebody who wanted a big bear, and didn’t want to buy one,” said Hodges.

“Just saw it kind of sitting out there.”

The response to the store’s request has been swift on social media, with hundreds of shares on their “Missing Bear” poster. Hodges also said the police have been informed of what happened.

“We’d really like to get him back,” said Hodges.

“Otherwise we’re going to have to replace him, and that would just be sad.”