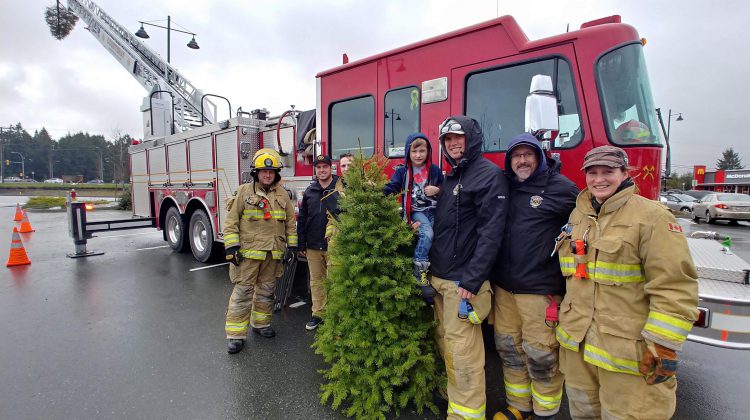 Members of the Courtenay fire department with one of the many trees chipped this weekend. Photo by Kieran Wilkie/98.9 The Goat/Vista Radio

COMOX VALLEY, B.C.- Residents turned up in droves to dispose of their Christmas trees with the help of the Comox and Courtenay fire departments.

“(We had) lots of support from the public this year, both our locations at the Courtenay fire hall and Thrifty’s were very well attended,” said Courtenay Fire’s Deputy Chief Kurt MacDonald.

“Lots of people dropped off their trees and we’re very happy with the results.”

MacDonald said as of Monday morning, they did not have an exact number for funds raised, but noted they are “up over $3,000 raised for the event.”

Money donated will go towards local charities and youth sports groups in the Comox Valley.

The department said a couple hundred trees were dropped off during the event.

A statement from the department read, “the Courtenay Volunteer Fire Dept. would like to thank the City Of Courtenay, Crown Isle Thrifty Foods and the Citizens of Courtenay for supporting the Annual Tree Chipping Event, making it a fun and amazing fundraiser.”

Turnout was also strong in Comox.

Assistant Chief Jim Lariviere said the event is well supported every year, and that wasn’t any different this weekend.

“We got several thousand dollars,” he said.

Lariviere noted that more than 400 trees were dropped off. Residents also took advantage of the at-home pick up service that was offered.

“We get a list and then we head out all day on both days and pick them up,” he said.

“Even if they (residents) are away, they just leave the tree out on their yard with an envelope for the donation.”

Funds raised from the Comox tree chipping will go towards You Are Not Alone (YANA) Comox Valley. YANA provides support to local families traveling for medical services for their children.