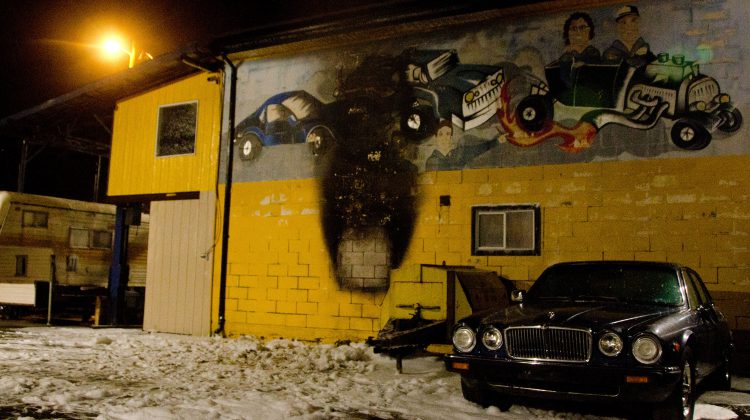 The south exterior wall of Seeco Automotive is scorched after a vehicle fire on the night of Jan.9, 2018. Photo by James Wood/98.9 The Goat/Vista Radio

COURTENAY, B.C- An auto shop in Courtenay has suffered minor damage after a suspicious car fire on Tuesday night.

The shop did not suffer any major damage in the blaze, but a large scorch mark can be seen along the south wall of the building. A mural along the top of the wall is now blackened in the middle.

According to the owner of Seeco Automotive, Ron Barnes, the vehicle that burned was a former My Tech Guys car, and had been used for parts for the last few years.

“There shouldn’t have been any reason for the car to catch fire.”

Barnes said there was nothing flammable in the car, which didn’t have a battery. He indicated he now has a file with the RCMP on the fire.

Eyewitnesses at the scene told 98.9 The Goat that the fire began around 8:30 p.m., with at least three fire engines responding to the scene.

RCMP officers also came to the scene, and the burned vehicle was later towed away.

Both the Courtenay Fire Department and the Comox Valley RCMP are investigating what happened. Fire Captain Jonathan Welsh confirmed the fire was seen as suspicious.

Barnes said Seeco would be open for business in the morning.