UNION BAY, B.C- A recent email exchange with a Union Bay trustee has put a spotlight on how the district handles it’s record-keeping.

According to the information listed on the Union Bay Improvement District (UBID) website, all six elected trustees of the district appear to be using personal email addresses to communicate with each other and landowners in the district. 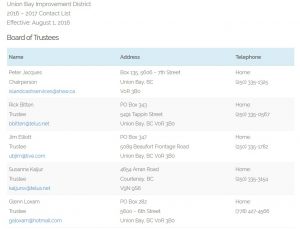 The use of those personal email addresses led to the spouse of trustee Glenn Loxam responding to an inquiry from a member of the public, instead of the trustee it was intended for.

In an email exchange posted to a local blog focused on Union Bay matters, Cheri Loxam, the wife of Glenn Loxam, appears to have replied to a message that appears to have been sent to the UBID administration in late December.

The sender had copied every member of the trustee board in the message. The photo of the exchange, posted to the blog, is included below.

The email exchange, as posted to allthingsunionbay.com.

When reached for comment on the matter, Glenn Loxam stated he had no issues with his use of a personal email for UBID business, and said he had no plans to change his email practices.

Cheri Loxam also confirmed that she had replied to that particular inquiry, though she had only done so because she recognized the sender.

98.9 The Goat reached out to Gordon Mason, the administrator for the UBID, for clarification on what rules the district has on personal email use by trustees.

According to Mason, the UBID doesn’t have an internal email system, beyond the one used for employees of the district.

“The emails that are posted on the website are the emails that trustees use for corresponding between themselves and the landowners,” said Mason.

There are also no plans to change the email addresses listed on the website, or to give trustees email accounts that are used for solely UBID business.

“Currently, there are no plans in place to change anything,” said Mason.

“We have internal email addresses for the staff, and for the trustees, they use the addresses that are posted on the website.”

98.9 The Goat also reached out to the Office of the Information and Privacy Commission for British Columbia for further clarification on the rules governing personal email use by public officials.

While they couldn’t comment on the specifics of the Union Bay situation, the agency indicated that there are no regulations in provincial privacy legislation that prohibit the use of personal email accounts.

However, the use can “frustrate” the ability of public bodies to comply with their duties laid out in that legislation, with a focus on the accessibility, security, and storage of records in Canada.

The agency’s response indicated that under the Freedom of Information and the Protection of Privacy Act (FIPPA) in British Columbia, public bodies are required to take reasonable security measures to protect personal information in their custody, or control.

If personal email accounts are being used for public business, the messages are considered to be under the control of that public body.

Emails are also considered records under FIPPA, and are subject to freedom of information requests, which means the public body must be able to search for and retrieve records that fit those requests. According to the agency, personal email use could make this process difficult, as the public body may not be aware of emails that are responsive to the request.

FIPPA also requires that public bodies store personal information in Canada, as it’s disclosure is restricted outside of the country. The use of an email service with servers outside Canada could lead to a risk of non-compliance with FIPPA.

When asked for further information on the email practices of the UBID, Mason indicated that he couldn’t answer any questions about how trustee’s store their emails, or if they are actively archiving their emails concerning UBID business.

When asked if members of the public and residents in the UBID could assume that only trustees will be viewing emails sent to their email addresses listed on the district’s website, he again couldn’t answer the question.

“I can not answer this questions as this is personal information concerning the trustee’s,” he wrote, in an emailed response.

Despite his inability to answer most questions related to the email practices of the trustees, Mason did state that the district follows Chapter 165 of the Freedom of Information and Protection of Privacy Act, which lays out how public bodies should handle the information they collect.

He also said that all information requests concerning the UBID come straight to him from the Information Access Operations branch of the Ministry of Citizen’s Services.

However, when asked if he would be able to search the personal email accounts of trustees for information pertaining to a request, his reply was simple, –simply “NO”.

He also couldn’t answer whether or not any steps would be taken to ensure that personal information collected by the UBID in trustee’s email accounts would be stored in Canada, as is required by the legislation he indicated the UBID follows.

“I can not answer this questions as this is personal information concerning the trustee’s,” was his emailed response.

Peter Jacques, the chairperson of the UBID board, declined to comment for this report.