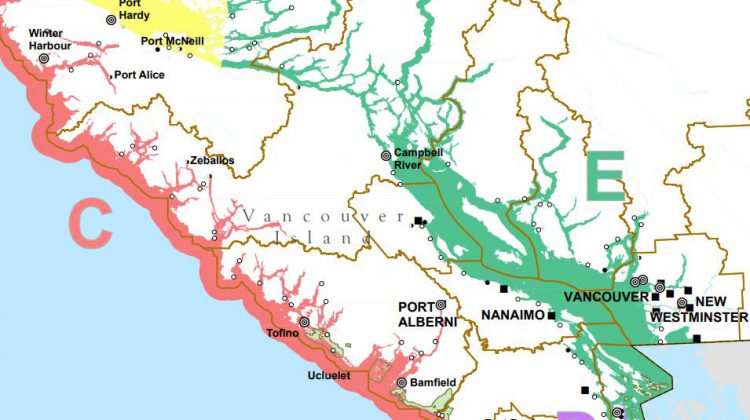 A map of the Tsunami Notification Zones. Photo courtesy BC Government.

COURTENAY, B.C.- Early Tuesday morning, coastal areas of BC were hit with a tsunami warning after a large earthquake struck off Alaska. The warning was subsequently canceled.

Emergency coordinators across the region are now preaching the importance of being prepared, no matter where you live.

In the Comox Valley, Emergency Program Coordinator Howie Siemens said that the area does not actually have a tsunami warning siren. However, he said the Valley might not actually need one.

“We are at a very low risk area for tsunami,” he said.

“The biggest one (earthquake) that we are worried about is the one off the West coast and for our side, we call it Zone E from the Emergency Management BC offices. They had notified us right off the bat that our area was not at risk (Tuesday morning), so there was no risk to our communities.”

Emergency Management BC has the province separated into five Tsunami Notification Zones:

More information on the Tsunami Notification Zones can be found through this link.

“Our tsunami would always be a low risk to us in this area,” Siemens said.

He noted that, locally, emergency coordinators are working on a regional notification system.

It allows residents to be notified of any issues in the Comox Valley, such as boil water advisories and severe weather. Siemens said they’re looking to expand the program going forward.

You can sign up for the Comox Valley Emergency Program’s notification system at this link.

In relation to the notion of running to high ground in case of an earthquake, Siemens said the only thing that would trigger a quake would be on the mainland side, and that “it’s not a high risk on that side.”

“The fault line is on the West coast, so there would be a very low risk.”

Siemens did note though, that if disaster strikes, and you are on the shoreline, to get away from that area, as far as you can.

“There is no history of any tsunamis on the East side of the Island,” he said.
Siemens also explained that when it comes to the snow levels at higher ground, in an area like Mount Washington, that we don’t necessarily have to worry about any snow melts come spring-time.

“There are challenges for (BC) Hydro to control the water that’s coming out, but because we don’t have a lot of the storm surges and stuff like that, it’s a little easier for them to manage (the snow melt).”

For more on the Comox Valley Emergency Program, visit their website.