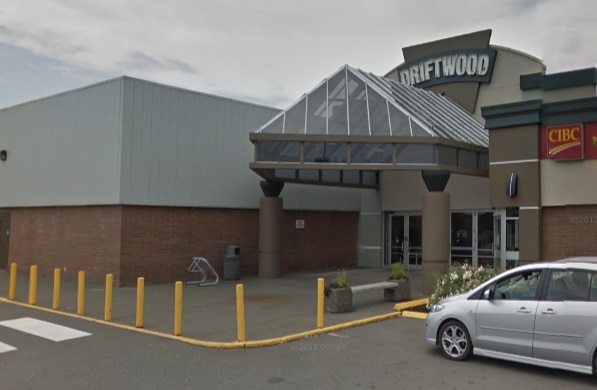 The entrance to the Driftwood Mall. Image sourced from Google Maps.

COURTENAY, B.C- A local mother is shocked after her children were flashed on Sunday.

According to Courtenay resident Heather Colman, three of her daughters were approached by an older man while sitting on a bench in the Driftwood Mall on Sunday, around 4:00 p.m. The man than allegedly exposed himself to the girls, aged 11, 16, and 19, while Colman was shopping with her fourth daughter in the mall’s Dollarama.

After the incident, Colman’s daughters ran back to their mother and told her what had happened. Colman left them in the Dollarama to pursue the man, but didn’t find anyone who matched the description supplied by her children.

According to Colman, the man was described as older, with grey hair and blue jeans. She spoke with mall security about what had taken place, and called the Comox Valley RCMP to report the incident.

Colman said that officers have since taken statements from her daughters, and are investigating the matter. She’s “furious” about what took place.

“I should be able to take my daughters to the mall and have us all be safe there,” said Colman.

“I feel like that’s rocked us all. There is a sense of danger, now, and we’re going to be working with counselors to remedy that.”

Colman said her children are shaken, and have described the experience as surreal.

Police have confirmed their investigation of an “incident” at the Driftwood Mall, though they did not have any additional information as of this publication.

If anyone has information about this incident, they should reach out to the Comox Valley RCMP.