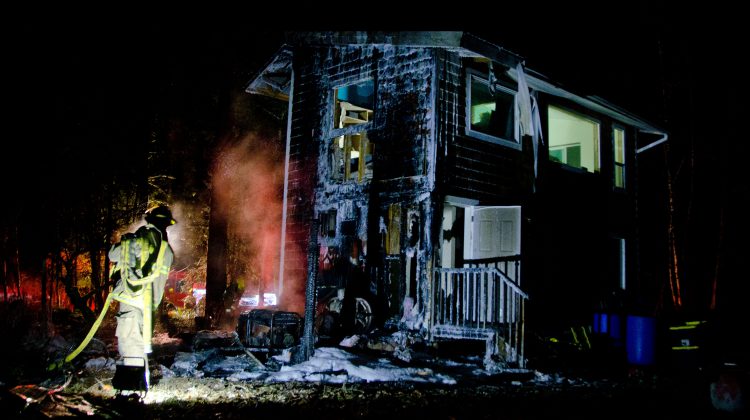 A firefighter with the Courtenay Fire Department wraps up hose at the scene of a Merville house fire on Feb.10, 2018. Photo by James Wood/98.9 The Goat/Vista Radio

MERVILLE, B.C- A home has been left with major damage after a fire on Saturday night.

According to Courtenay’s deputy fire chief, Kurt MacDonald, firefighters got a call about the fire around 6:00 p.m. The initial call indicated a shed fire along Fitzgerald Road, close to the intersection of Fitzgerald Road and Winn Road.

Upon arrival, firefighters found that the fire had spread to the structure, with Oyster River Fire Rescue being called for mutual aid due to the area’s lack of hydrants.

Two people were home at the time of the incident, with one man suffering burns to his neck and face. While firefighters tended to the injuries of the occupants, others went to work knocking down the fire.

The flames were confined to the exterior of the home and the shed, while the interior was checked out for fire spreading inside.

“We believe it is related to some generating equipment they had in there, but we won’t have a definite cause until we do a quick investigation,” said MacDonald.