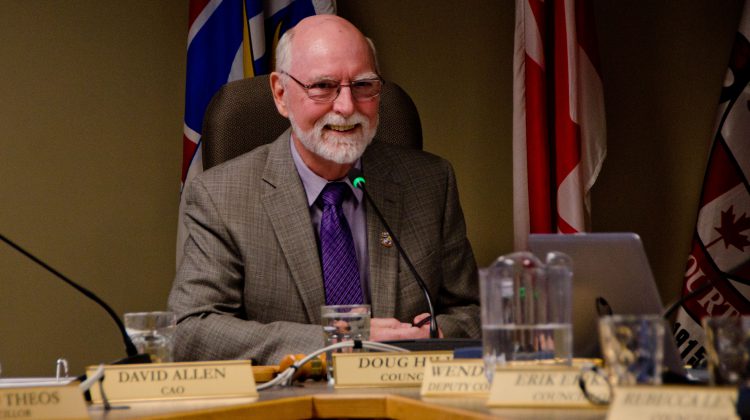 Councillor Doug Hillian is pictured during the city council meeting on March 5th, 2018. Photo by James Wood/98.9 The Goat/Vista Radio

During Monday’s meeting of city council, a proposal from the club came to the gathered councilors looking for public input on an extension of their liquor serving hours on weekends.

The club wants to change their start time for liquor service from noon on Saturday and 11 a.m. on Sunday to 9 a.m. on both days. In their submission to council, the club indicated that their lounge is not meant to be open to the general public, and both visitors and members have been asking for extended hours.

Other authorities have been made aware of the request, with School District 71 and the local RCMP detachment questioning the need for the extension. While discussing the matter, councilors were generally supportive, and have put the request out for public input on the City of Courtenay website.

“Personally, I don’t see why people need to drink between 9 and 12 in the morning, but we’re not the moral police,” said Councillor Doug Hillian, who presided over Monday’s meeting as acting mayor.

“This is a club of long standing in the community, and I think that if we trust them to police themselves as they have in the past, we have to look at their request seriously. There is always a concern that there are individuals in the community, when liquor is made more available, longer hours more locations, it’s consumed. That’s a problem for some people.”

Council will be looking at the request again on March 19, and sending a written resolution to the Liquor Control and Licensing Branch after their meeting.