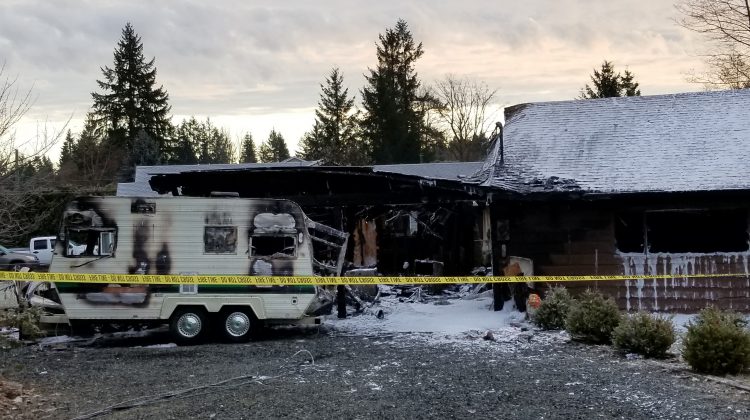 The aftermath of a fire that destroyed a Courtenay home Saturday night. Photo by Justin Goulet/98.9 The Goat/Vista Radio

COURTENAY, B.C- A family pet is missing after a destructive house fire over the weekend.

The blaze broke out around 8 p.m. on Saturday evening, close to the intersection of Houlgrave Road and Salsbury Road.

According to Courtenay fire chief Don Bardonnex, the fire began in the home’s carport. The exact cause of the fire remains unknown. The flames caused propane tanks to vent, and overhead power lines to burn and snap, leaving live wires strewn around the property.

Bardonnex said there were no fragments from exploded propane tanks found at the scene, and more than half of the house is still standing. The carport, along with a trailer and camper, was destroyed.

There were no injuries to the occupants reported, while two pets were not found at the home after the fire. The missing dog has since been found, while Bardonnex indicated the cat’s whereabouts is still unknown.

A total of 21 firefighters responded to the incident, along with two engines.