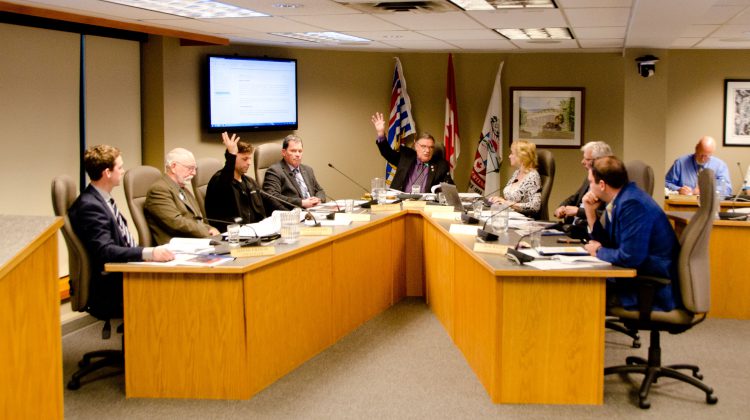 Mayor Larry Jangula and Councillor Manno Theos vote against a property tax increase during a meeting of Courtenay city council on March 19, 2018. Photo by James Wood/98.9 The Goat/Vista Radio

COURTENAY, B.C- Property taxes are going up in Courtenay.

During the latest meeting of city council, the municipal administration presented council with the planned increases to property taxes in Courtenay’s 2018 budget. According to the agenda documents, the raise being sought by administration is 2.5 per cent, which would mean a total of $36 added on to an average property tax bill of $1431.

After discussion on the topic and presentations from staff on the budget, council voted in favour of the increase, passing with four votes in favour against two dissenting votes from Mayor Larry Jangula and Councilor Manno Theos.

Jangula had previously attempted to put in an “immediate tax freeze” at 2017 rates, as well as a services review in the city administration. Both proposals were shut down by council.

After Monday’s meeting, Jangula said he wasn’t happy with the direction the budget was taking, citing money being used from surpluses and an increase of $4 million.

“We won’t have surpluses there forever, my concern about this entire last two or three years, where this council is, is that we’re spending money that we often don’t have,” said Jangula.

“Like the old term about a drunken sailor in port, every group that comes, we give them money. We say no to no one. We had two groups, both wanted money and lots of it, and we say “yes we’ll do it”. Sooner or later, that is going to catch up with us. I think it is right now.”

Jangula also believed the spending wasn’t being directed towards the right departments, such as the state of the community’s roads.

“There is a huge, big ticket item coming down for our taxpayers, and it is going to be very painful,” said Jangula.

After the General Fund budget (which holds the property tax increase) is approved, all of the city’s budgets will be consolidated into one financial plan. Council will have time to review the document, and a chance to give it three readings on April 3.

Final adoption would be on April 16, with the tax rate bylaws coming before council on April 30. Final reading would be on May 7.

“The Consolidated Financial Plan,Property Tax Rates and Bylaws  must be finalized and adopted no later than Monday, May 14, 2018,” read the agenda documents.

“Any delay past this date will have an impact on the Municipality’s ability to generate current year tax notices.”

Jangula doubted that the projected property tax increase would change.