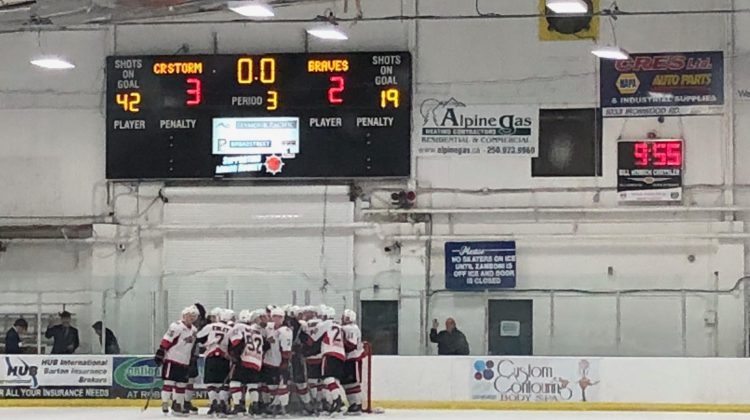 CAMPBELL RIVER, B.C. – It was a packed house at the Rob Brind’Amour Arena Friday night for game two of the VIJHL finals between the Campbell River Storm and Saanich Braves.

After a hard-fought game one, which was decided in triple-overtime and saw the Braves win 5-4, the pressure was on for the Storm.

The scoring started early as the Storm used the crowd’s cheers to their advantage. Darren Hards scored at the 6:46 mark, followed by a goal from Dawson Frank at 7:26. The Storm taking a face-off against the Braves on Friday, March 23 2018. Photo by Justin Goulet/98.9 The Goat/Vista Radio

No goals were scored through the second period, but the Storm started the third and final period off fast and furious.

Brett Kinley ripped one past Braves’ goalie Riley Mathieson at 2:04 to put Campbell River up 3-0.

The Braves made a last minute push, scoring two power play goals (Gavin Grewal, Elliott MacIsaac), but it was not enough and the Storm came away with the 3-2 win to tie the series at 1-1.

Up next are games three and four in Saanich. Game three is tonight at 7:45.