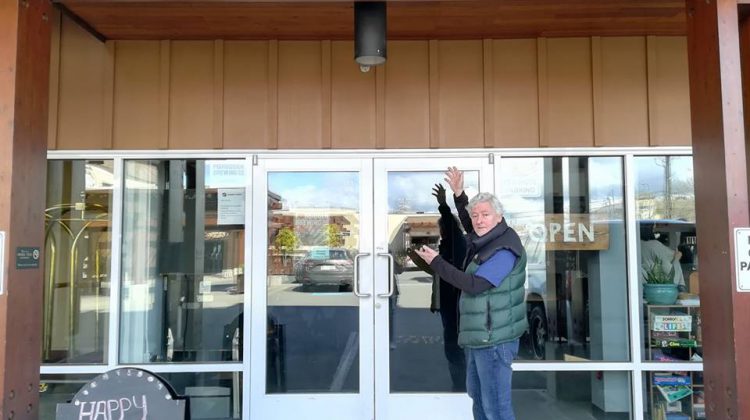 A photo of Vincent gesturing at the space where the sign used to be. Image sourced from Forbidden Brewing's Facebook page.

COURTENAY, B.C- A local brewery lost a large part of their signage over the weekend.

According to Michael Vincent, the owner, operator, and CEO of Forbidden Brewing, the business lost its main sign over their door between Friday night and early Saturday morning. The sign had been nailed to the building that houses the brewery, with six screws.

Forbidden Brewing’s current location is part of the Best Western in Courtenay. Earlier in the year, the brewery was locked out of it’s location by hotel management in a rental dispute, though they’ve since been allowed back in.

Vincent believed that whoever had come to take down the sign would have had to use a step ladder and a screw gun. Despite the loss, he does plan on getting a new sign to replace the one that went missing.

“We’ve been looking for it in the garbage bins by the side of the hotel,” said Vincent.

“It will reappear, but in the form of a new sign, and I will install it, so that it is more difficult to remove.”

Vincent said the incident has been reported to the police, who have confirmed they are looking into the matter.

“If somebody wanted a souvenir, the sign for the brewery or the sandwich board is out on the street,” said Vincent.

“It’s much more difficult for someone to come to the front of our actual storefront and get a ladder and screw gun. I don’t think that is just somebody looking for a souvenir.”

Despite the setback, Vincent plans on remaining open for business.