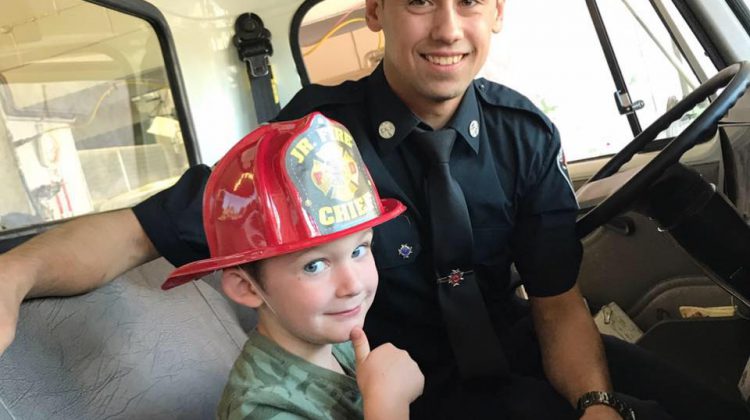 Firefighter Jordon Allen is pictured with a relative in a photo sourced from his Facebook profile.

CUMBERLAND, B.C- Cumberland’s fire department have handed out their honours for the year.

The service held it’s 123rd awards banquet over the weekend, at the Cumberland Cultural Centre. During the event, two long service medals were handed out, as well as the award for top firefighter of the year.

According to Cumberland’s deputy fire chief Craig Windley, the event drew between 85 to 90 people, with many of them being former or current members.

“We had lots of retired members, (and) honorary members show up, and it was really well done,” said Windley.

“It’s a huge value. The village puts this banquet on once a year for our firefighters in appreciation for all their volunteer service and the work that they do. It’s really nice to be appreciated by the village.”

Windley also had praise for Jordon Allen, who won firefighter of the year for a second time in a row.

“He’s taken his officer program, he’s stepped up as a new officer this year, he’s here every Tuesday night doing truck checks for us. Jordon has just done a great job, even on the extracurricular. He shows up for toy drives, food drives, any extras, he’s always been showing up for.”

Allen told 98.9 The Goat he was happy to have won, though he thought there were others who deserved the honour.

The Cumberland fire department is made up of volunteers, with 24 active members.