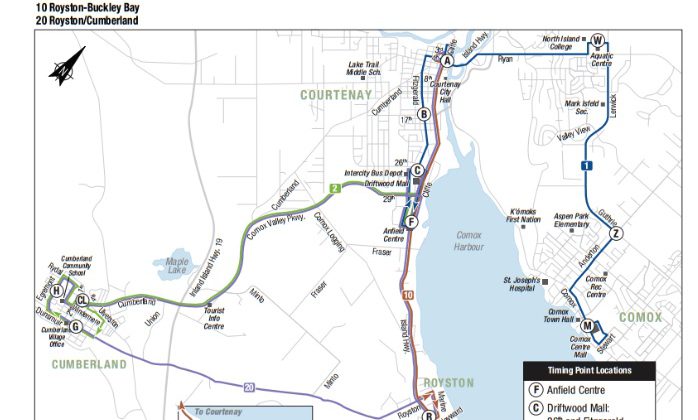 An example of route planning in the expanded transit system, sourced from CVRD agenda documents.

COURTENAY, B.C- The Comox Valley’s transit system is getting an expansion.

During the latest meeting of the Comox Valley Regional District (CVRD) board of directors, an expansion to the area’s transit service came up for final reading. The expansion is meant to increase the service levels of BC Transit in the Valley by 4000 hours, at a cost of $455,289.

The eventual aim of the expansion is to put together what is called a Frequent Transit Network, which would carry the majority of the transit ridership through the core areas of the Valley. The new network is also projected to increase ridership by up to 100,000 people per year, while resulting in a change to the existing routes.

“As a result of additional ridership expected from this expansion, bus fare revenue is estimated to increase by $12,000 in 2018 and $45,000 per year afterwards,” read a report on the change from the CVRD.

“These costs and revenues have been included in the 2018 proposed budget. A revised fare structure is also targeted to be implemented in September 2018 in conjunction with the service expansion. The new fare structure is expected to result in increased revenues of approximately $25,000 annually.”

Two additional buses have been ordered as part of the expansion, and the CVRD also found that current use of the system had levelled off at around 570,000 people per year.

“(This is) due to the fact that there has been no significant transit improvements or increases in the past several years,” read the CVRD report.

“The 4,000 hour expansion and associated improvements planned for September 2018 is expected to increase ridership by approximately 100,000.”

Changes from the system will include a new exchange in Comox, and decreased service along Comox Road impacting K’ómoks First Nation. Both changes will have the CVRD consulting with the affected governments.

While the expansion was passed by the board of directors on Tuesday, it was not without opposition. Director Larry Jangula of Courtenay voted against it, as did Director Manno Theos, also of Courtenay.  Rob Nichol, the Director of Electoral Area B, was opposed as well.

All three thought the costs of the expansion were too high.

“I don’t believe that the scheduling, in my opinion, or any other matters, are blocking people from doing that. The cost of 4,000 hours is significant, and businesses are the ones that get hurt the most. In my opinion, businesses will be paying two and a half to three times the amount as the average residential homeowner, so I think that it is a crushing blow.”

With the expansion past final reading, it will begin to be implemented in September. More information about the planned changes can be found here: