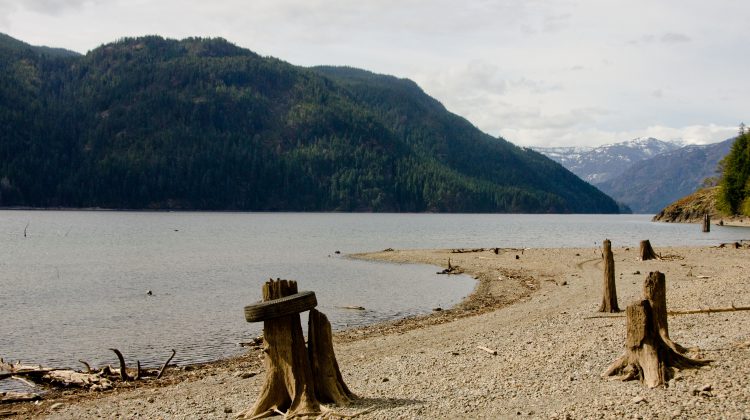 CUMBERLAND, B.C- The water is getting lower at Comox Lake.

Visitors to the lake may have seen more exposed tree stumps and rocks in the last few weeks, with the low water level most visible at the Puntledge River dam. Rocks that are usually underwater are fully exposed, and waters are below one of the spillways.

According to Stephen Watson, spokesperson for BC Hydro, a record-setting dry period has been hanging in the Valley since February, which has resulted in the lowered levels.

He said that February of 2018 had been the fourth driest on record, with 34 per cent of normal rainfall, while March had a 37-year record of only 15 per cent.

Despite the dry weather, Watson was confident in snowmelt and rain coming to relieve the reservoir.

“We know that that water is up there, but we’d like to have it come into the reservoir,” said Watson.

“Right now, we’re in conservation mode. We’re running the generating station at a very low capacity, just to conserve water, so we can get into that later in the spring.”

He also indicated that the dry spell was a variation in weather patterns, though variations from dry to wet were more the norm than in previous years.

“It is certainly abnormal, it is very low right now, but we’re not too concerned because we know the snowpack is going to melt,” said Watson.

BC Hydro may have to adjust their water supply forecast, down from 89 per cent. The aim is conserve meltwater when it comes into the lake.

As for flows into the Puntledge River, Watson said that target fishery flows were being maintained, with hope to increase them through April and May.

“We basically want to have a full reservoir into June, so we can manage into the summer period,” said Watson.

He didn’t foresee any issues that would cause a major change in flow rates or the level of drinking water for the Valley.

“We still get some inflows, a little bit of rain, a little bit of snowmelt here and there. Once we get into late April, to early May, we see some significant inflows come in to fill the reservoir.”

Though they’ve had some inquiries from concerned residents, Watson said BC Hydro was “doing their best” and indicated that they’ll be watching the reservoir levels closely in the summer.

“We’ve been through these types of fluctuations, month to month, year to year, over time,” said Watson.

“We’ll operate, and manage to do as best we can.”