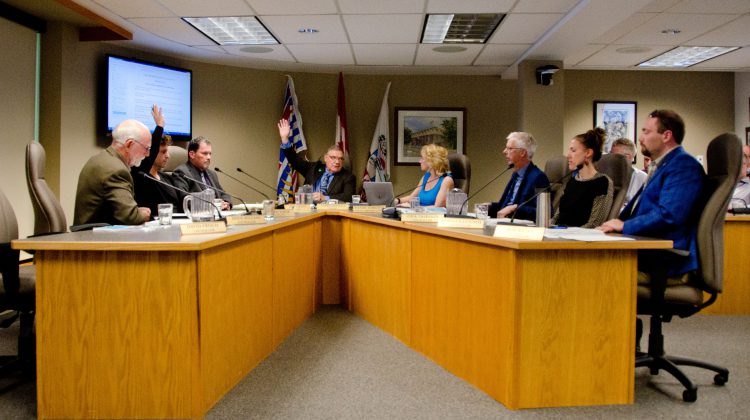 Mayor Larry Jangula and Councillor Manno Theos vote no during on the budget presented to Courtenay city council on April 3rd, 2018. Photo by James Wood/98.9 The Goat/Vista Radio

COURTENAY, B.C- Property taxes in Courtenay could be going up slightly less than planned,

For the last two months, city council has been working through the budget approval process in Courtenay, which has resulted in several projected rises to rates of city services and property taxes.

In the draft General Fund budget presented on April 3, council was being asked to approval a rise of 2.5 per cent in property taxes for the 2018 budget.

According to the overall information for the general fund, the municipal government is looking at spending $33.328 million on operating funds in 2018, with $11.166 million set for capital spending. A total of $2.704 million is going into surpluses and reserves.

However, the rise in property tax has an object of much discussion by council. On Tuesday evening, that discussion resulted in a motion from Councillor Doug Hillian aimed at reducing that rise by one per cent, down to 1.5 per cent for the year.

The dropped percentage would have been money going into reserves for the city to spend on asset replacement. The idea found traction at the council table, and was eventually passed, despite opposition by Mayor Larry Jangula and Councillor Manno Theos.

Both Theos and Jangula have been steadfastly voting against the proposed financial plans for 2018, basing their opposition on concerns that taxpayers in Courtenay can’t afford the rises.

After the meeting, Jangula expressed doubt that the reduced property tax rate will be the final rate when the budget is adopted.

“It’s going to up by a lot more than that, this year,” said Jangula.

He cited concerns about budgets rising at the Comox Valley Regional District, and within Courtenay’s municipal government, as well as a lack of spending on infrastructure such as paving.

“Who do we think pays this? It’s the property owners and the business owners,” said Jangula.

He said the city is planning to pave one kilometre of roadway in 2018, and wanted to see more.

“It’s going to catch up to us, and it’s a ticking time bomb,” said Jangula.

As for his thoughts on council bringing in a drop for property taxes, Jangula thought it wasn’t a bad thing.

“Except they won’t be down, and stay down,” said Jangula.

“It’s not going to stay down.”

The final budget has not yet been passed.