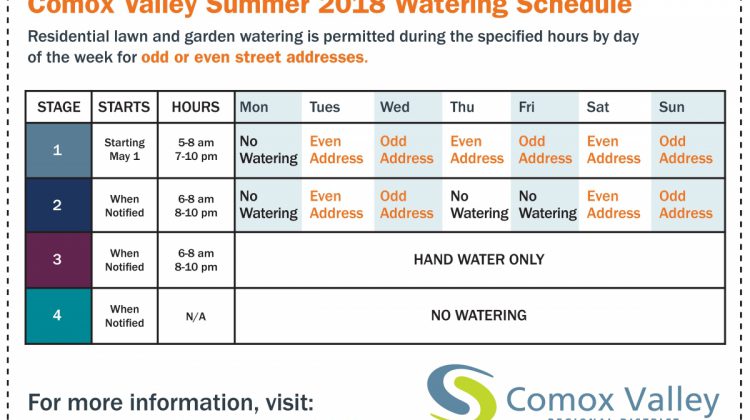 A supplied graphic of the restrictions.

COURTENAY, B.C- Water restrictions are coming into effect on May 1 this year.

According to a news release from the Comox Valley Regional District, changes are being made to it’s watering bylaw to cut down on consumption, and help residents comply with yearly restrictions. Part of the changes include adjustments to the lawn watering days in Stage 1 restrictions, as well as a shift in watering times under Stage 1 and Stage 3.

“We received a lot of feedback from residents who found the transition from Stage 1 to Stage 2 to be problematic, especially for those with automated watering systems,” said Mike Herschmiller, Manager of Water Services for the CVRD, in the release.

“The changes include small updates to both watering days and times that will make the rules more consistent as we move through the water restriction stages each year.”

With the changes, Stage 1 will take effect every year on May 1st and watering days will be set to certain days of the week.

Watering days will be consistent between Stage 1 and Stage 2 with Stage 2 having one less watering day per household each week.

The change means those with automated sprinklers can set their watering system at the beginning of the season and just adjust the watering times as restrictions move from Stage 1 to Stage 2.

The morning watering time in Stage 1 has also been adjusted in an effort to reduce water use during periods of high consumption.

Communities affected by the shift include the City of Courtenay, the Town of Comox, the Comox Valley’s local water service area, the Sandwick water system, and Arden, Marsden/Camco/Greaves Crescent and England Road water service areas.

Restriction levels will be changed and announced by the CVRD as the water situation develops.