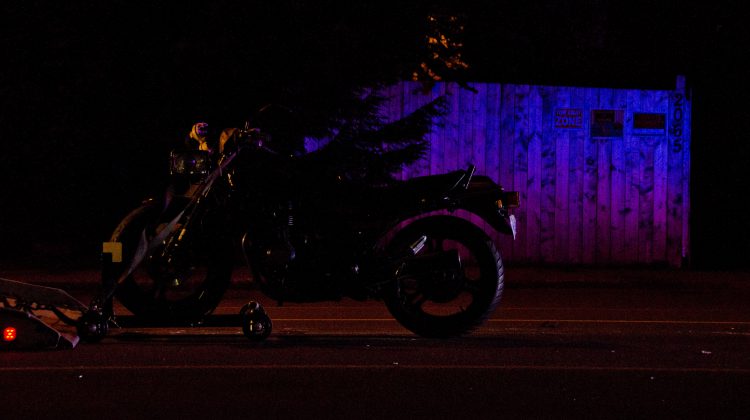 A motorbike is wheeled onto a tow truck after a collision along Fitzgerald Avenue on the evening of Thursday, April 26. Photo by James Wood/98.9 The Goat/Vista Radio

Around 9:30 p.m., a southbound Crown Victoria was waiting to make a left hand turn into a parking lot, close to the intersection of 21 Street and Fitzgerald Avenue.

According to Constable Furtmann of the Comox Valley RCMP, a northbound motorcycle had been heading up the road when the driver of the Crown Victoria went to make their turn into the complex, and the rider did not have enough time to stop.

The rider of the motorcycle dropped the bike in an effort to come to a halt, with the bike ending up striking the vehicle. The rider suffered minor injuries, and was taken to hospital by the BC Ambulance service.

According to Furtmann, the rider was talking to emergency responders when he was taken for treatment, “in good spirits and chatty.”

The constable indicated there were no charges being considered in the incident, and recommended that motorcycle riders and drivers be vigilant.