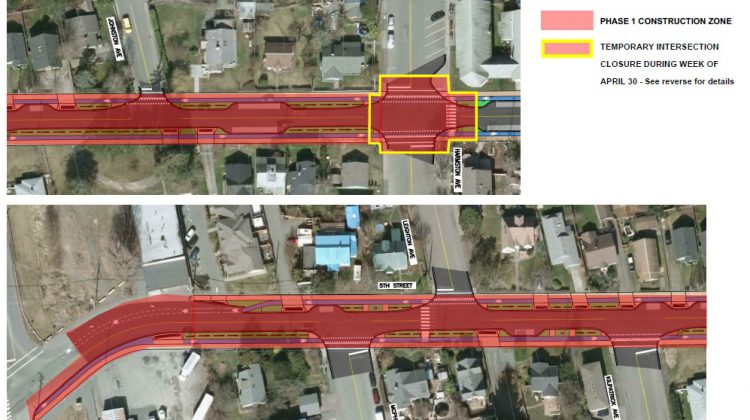 A map of the construction.

COURTENAY, B.C- 5th Street will be under construction, starting next week.

According to a release from the City of Courtenay, the start of the “Complete Streets” project will be begin on April 30, at the intersection of 5th Street with Harmston Avenue.

“Construction will occur along 5th Street between Fitzgerald Avenue and Menzies Avenue and will be complete in October 2018,” read the release.

“Work will occur Monday to Saturday, between 7 a.m. and 6 p.m. The contractor, Copcan Civil Ltd., will strive to minimize disturbances during construction.”

The construction will see a “substantial overhaul” of above-ground and below-ground infrastructure on 5th Street between Fitzgerald and Menzies Avenues.

Once the work is done, the project is expected to improve walking and cycling infrastructure in the area. New landscaping and stormwater management with rain gardens are also expected to be an improvement.

“The contractor will start work at the intersection of Harmston Avenue and 5th Street mid-week next week and will work west along 5th Street to Menzies Avenue,” read the release.

Vehicle access onto the businesses on 5th Street will remain open during the Harmston Avenue closure. The first month of construction will include the following traffic changes, according to the city.

All eligible costs from the project will be covered by federal funding drawn from gas taxes.