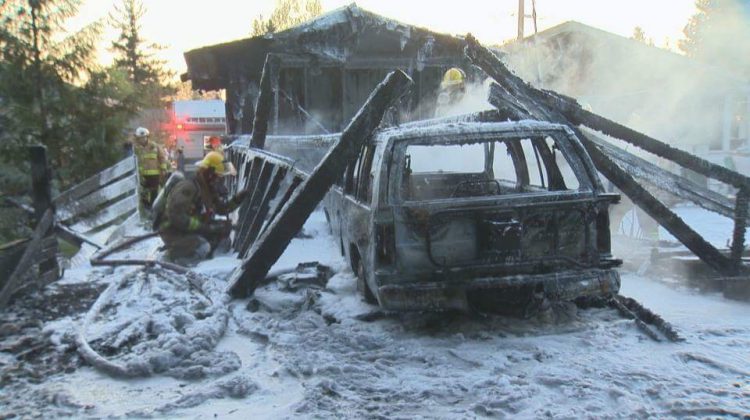 Crews on scene of a shed fire in Courtenay on May 1, 2018. Photo courtesy Gord Kurbis/CTV News Vancouver Island.

COURTENAY, B.C. – A vehicle has been destroyed by an early morning fire in Courtenay.

The fire department responded to a report of a shed on fire in the 1700 block of McPhee Avenue.

“When we arrived, we found a fully engulfed shed with a car inside of it, and the fire starting to spread to the house on the same property,” said Deputy Fire Chief, Kurt MacDonald.

“Crews got a quick knock down of both the residential home and the shed, overhauled it and were able to pretty much keep a large part of the structure still standing.”

MacDonald said there were two people home at the time of the fire, who were alerted of the fire by a passerby. The male occupant of the home attempted to fight the fire with a garden hose and the female occupant called 911.

MacDonald added the residents did not suffer any injuries, and no firefighters were harmed during the incident. He said the fire has been deemed suspicious.

“We generally treat every fire as suspicious until we can prove otherwise,” he said.

“That way we can maintain continuity of evidence, and if something is found out of place, it makes it easier to determine what happened and prosecute the people that may have done something.”

He said some residents may have heard explosions during the incident.

“The only explosions were from the tires on the car, basically going off when the fire got through the rubber walls.”

There were also reports of melted siding on the structures around the fire.

MacDonald said RCMP attended the scene and are investigating. The cause of the blaze remains unknown.