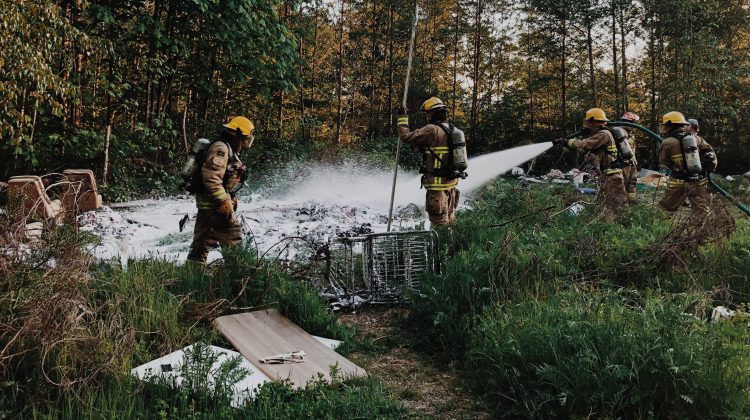 Members of the Courtenay fire department spray down a fire behind the Walmart shopping centre on May 12th, 2018. Photo by James Wood/98.9 The Goat/Vista Radio

COURTENAY, B.C- A small garbage fire behind a shopping centre in the Comox Valley was put out quickly on Saturday evening.

According to the Courtenay fire department, a call came in about a fire along Piercy Avenue around 7:58 p.m.

The flames were in a pile of refuse in an area where several makeshift campsites were visible, in a vacant treed lot behind the Walmart in the city’s south end. Image of the flames, courtesy of Lorne Sutcliffe.

One fire engine and one tanker truck responded to the scene, though the tanker truck was not needed for the call. A total of six firefighters used foam to spray down the garbage, putting out the flames in short order.

No injuries were reported from the scene, and an officer from the Comox Valley RCMP detachment was later seen checking out the area.

No residents of the camp were seen in the area at the time of the fire.