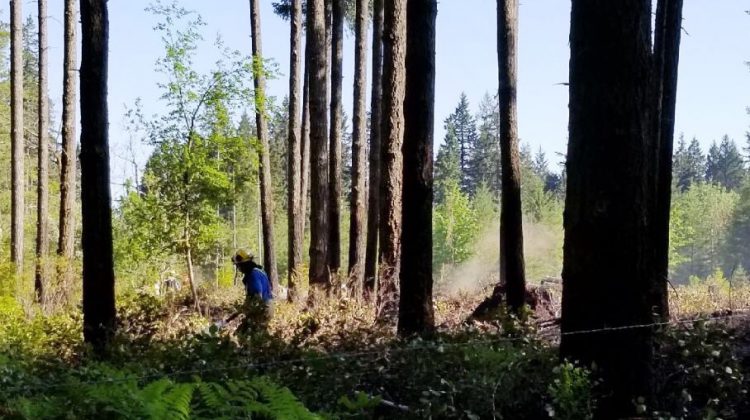 A firefighter sprays down brush while responding to a fire north of Courtenay on May 14th, 2018. Photo by Justin Goulet/98.9 The Goat/Vista Radio

MERVILLE, B.C- A brush fire in the north end of the Comox Valley was shut down today.

According to Courtenay deputy fire chief Kurt MacDonald, the fire consisted of a couple of acres of scrub bush, close to the intersection of Howard Road and Merville Road.

The flames were in a forested area along Howard Road.

During the call, which came in around 4:00 p.m., the Courtenay fire department used mutual aid from Oyster River and Cumberland, bringing in additional tankers.

No major smoke or flames were visible from roads in the area, and firefighters quickly got the flames under control.

No injuries from the scene were reported, and no damage to structures.

However, MacDonald did have a message for residents.

“It is a sizeable area,” said MacDonald.

“Just a reminder, that even though we are in the middle of May, just how dry conditions are at this time.”

No clear cause for the fire is known at this time.