BC Hydro warning public away from Puntledge River 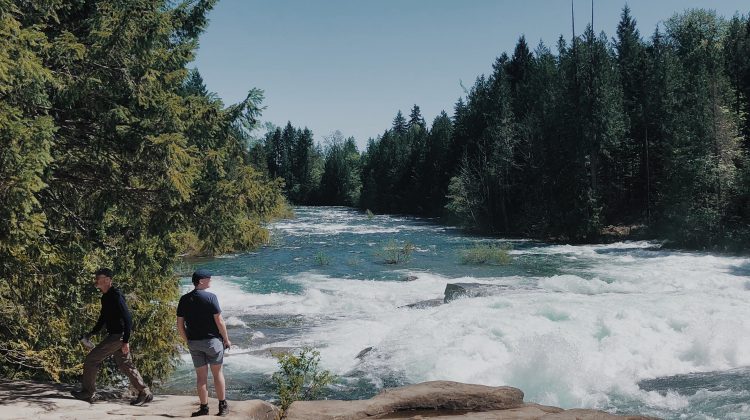 Two people stand near Nymph Falls along the Comox Valley's Puntledge River on May 12, 2018. Photo by James Wood/98.9 The Goat/Vista Radio.

COURTENAY, B.C- Residents of the Valley should avoid the banks of the Puntledge this weekend.

According to a notice from BC Hydro, water flow levels will be increased along the waterway this weekend. The increase is due in part to ongoing snowmelt, as well as a way to provide ideal kayaking conditions along the river.

“The Comox Lake reservoir dropped down to 134.58 metres from last weekend’s kayak flow release, and is currently at 134.71 metres,” read the notice.

“The reservoir level will continue to rise as the weekend approaches. BC Hydro’s goal is to keep the reservoir from free-spilling over the dam at 135.3 metres.”

The water discharge from the dam will be going up to 90 cubic metres per second on Friday night, and kayakers will be able to take advantage on Saturday and Sunday.

“For public safety we ask the public to stay away from the Puntledge River on Saturday and Sunday,” read the notice.

“Danger safety signage will be in place by Friday evening.”

The river may be at normal flow rates on Thursday and Friday, and during the week days next week for swimmers and river users. May 26 and 27 will have flow rates of up to 110 cubic metres per second for the annual Puntledge River Paddle Festival.

Annual testing of the river’s siren system is also being conducted today. The public are advised to not enter the river until after 4:00 p.m.