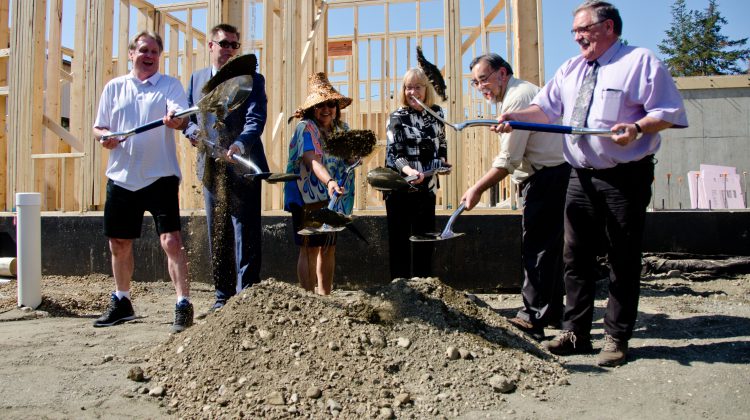 COURTENAY, B.C- A long-standing housing project in Courtenay’s east end is getting more funding from Victoria.

According to a news release issued by the province and presentations at a groundbreaking ceremony for the project held this afternoon, the government is pairing up with M’akola Housing Society and Wachiay Friendship Centre Society to build 35 new affordable homes in Courtenay for people at risk of homelessness, including Indigenous people.

“These homes are desperately needed as people in our community have been struggling for too long to afford housing,” said Ronna-Rae Leonard, MLA for Courtenay-Comox, in the release. “This project will make a significant difference for the people who will call it home. The Province will continue to work with community partners to get more projects like this off the ground to help British Columbians in need.”

Both the housing society and the friendship centre are the non-profit operators in the project, with M’akola serving as the project manager and Wachiay running day to day operations.

“We are honoured to be working in partnership with BC Housing, the Wachiay Friendship Centre and the City of Courtenay on this much-needed and community supported affordable housing project, which will be located on the traditional territory of the K’ómoks First Nation,” said Kevin Albers, CEO of M’akola Development Services and M’akola Housing Society, in the release.

“Affordable housing is a priority to this community and this project along with the strong support received is to be celebrated. Our teams are excited to be the development consultants and property managers for these 35 new purpose-built homes in the City of Courtenay.”

The building, which is located at 810 Braidwood Road, will have three storeys, and be made with a wood frame. A mix of studio and one bedroom units will be inside, along with a common room and office space. A four piece bathroom and kitchen will be included with each unit.

Six of the units will be rented out at $375 a month, which is the provincial shelter rate. Rental rates for the other units will be in the range of $580 to $760, and are aimed at helping low-income people with housing.

Six of the units will be rented at the provincial shelter rate of $375 per month. Rents for the other units will range from approximately $580 to $760 per month, helping low-income people with the housing they need.

One feature missing from the project will be 24/7 support services, which is currently planned for another housing project in Courtenay’s west end.

According to Roger Kishi, a member of Cumberland village council and Wachiay’s director of homeless and housing programs, 24/7 support is not in the plans for the project right now.

Support agencies in town will be stepping up to fill that gap.

“There will be a caretaker, that is part of the building, but it’s like being the apartment manager,” said Kishi.

“We will have some presence here, we still don’t know how many days a week, and there will be some office space, some private space, if one of the tenants wants to meet with one of the service providers.”

The absence of 24/7 support services stemmed from a lack of funding, according to Aalbers, and Courtenay councilor David Hillian stated this from the previous provincial government not including the service in funding when the project was first approved.

“That’s why it’s so important that the community agencies like Roger and Kevin mention have stepped up to fill that breach, because I think in the city, we recognize if we’re truly going to support marginalized people to find safe housing, it also had to be safe for the neighborhood as well, and that involved finding ways to support the people in their homes,” said Hillian.

The project is expected to be finished and ready by February of 2019.