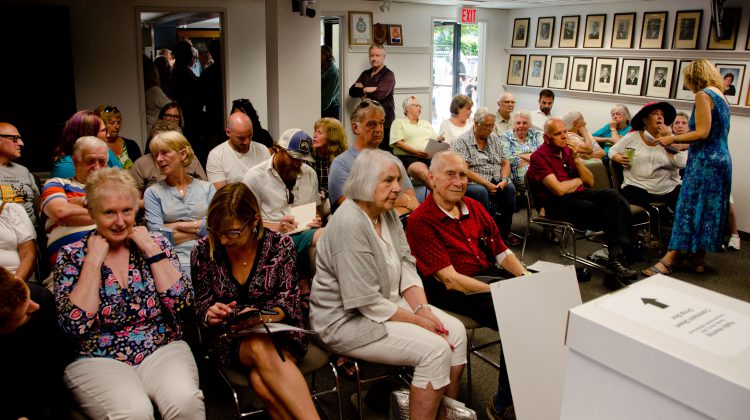 Attendee's are pictured at the public hearing for a housing project in Courtenay on May 22nd, 2018. Photo by James Wood/98.9 The Goat/Vista Radio

COURTENAY, B.C- The voice of the community has been heard on a new housing project planned for the Comox Valley.

During yesterday evening’s meeting of Courtenay city council, a public hearing was held on a rezoning bylaw for a 46-unit supportive housing project planned in the city’s west end, next to the municipal works yard. Around 80 to 90 people came out, filling the council chambers and spilling over to the City Hall lobby. Residents who were outside were able to wait their turn to come inside, add their name to the speakers list, or fill out a comment sheet. 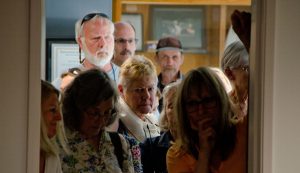 Spillover attendees are pictured at the public hearing for a housing project in Courtenay on May 22nd, 2018. Photo by James Wood/98.9 The Goat/Vista Radio

Around 23 people spoke in favour of the plan, while nine others were against the idea. Those opposed to the idea often stated they supported the idea of helping the homeless, but disagreed with the placement.

They also would have preferred the housing to be slated for seniors, instead of homeless individuals, and the question of lowered property values was also brought up.

One of those who spoke in favour was Stasia Hasumi, an assistant transition house coordinator with the Comox Valley Transition Society. 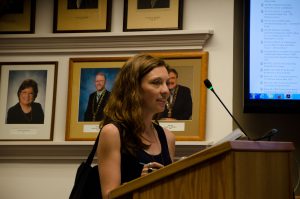 Stasia Hasumi is pictured while speaking at the public hearing for a housing project in Courtenay on May 22nd, 2018. Photo by James Wood/98.9 The Goat/Vista Radio

“I’m sitting way in the back there, listening to this rhetoric that it’s homeless needs versus senior’s needs, and what I know to be true is that these are many of the same people,” said Hasumi.

“It’s not an age issue, this is a huge classism issue, and an issue of NIMBY (Not In My Backyard) ism that is happening in our community.”

Hasumi stated that she would welcome the project in her neighbourhood, and said she found opposition to the project to be troubling and discriminatory.

“To those in our community and those in our room that believe supportive housing shouldn’t be in their backyard, I want you to know that they’re already here,” said Hasumi.

“Homeless people are already living in your backyard, and this project offers the opportunity for these folks to live in dignity and be supported by staff that are knowledgeable and trained to handle the crisis that may come up.”

Resident Laurie McMillan, who lives in the seniors village close to the proposed project, was highly opposed to the idea, though she indicated that it was due to the location, not her support for helping the homeless in the Valley. 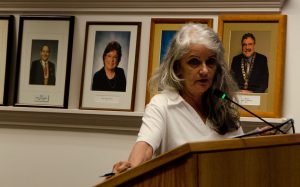 Laurie McMillan is pictured while speaking at the public hearing for a housing project in Courtenay on May 22nd, 2018. Photo by James Wood/98.9 The Goat/Vista Radio

“We need this project, but we need it spread out,” said McMillan.

“Let’s build it on some other city land, let’s get them out of the same area, we’ve had enough. These people that are supportive of this, they don’t know what it feels like on the other side of the tracks. We live right there, we see it out of our windows, we hear it out our doors. It’s really bad, and it’s escalated in the last month.”

McMillan made repeated mention of issues with drug trafficking in the area, which echoed other resident’s concerns about the land in question already being used for illicit activities. Earlier this year, needles had been spotted in the undergrowth on the land, and multiple people described a high amount of foot traffic at the site during the hearing.

Other social agencies have facilities nearby, with the Comox Valley Recovery Centre and the Salvation Army Pidcock House located in the area. Administrators from both spoke at the meeting in favour of the project.

“It seems like all those in favour aren’t living with us,” said McMillan.

“You all live across the tracks, and work at one of the facilities trying to help. But do you live within our block?”

She ended her presentation to council by echoing the concerns of those opposed.

“We do care, we just want it somewhere else,” said McMillan.

“It’s just ridiculous, what I’m hearing here. You’re dividing the community, by what you’re saying, as far as I’m concerned. None of you live, right where we do.”

One of the people who spoke in support was Robert Galligan, who referred to himself as “Bob the Bum”. He indicated he had had housing problems in the past, and asked council to keep up with the work on the housing proposal.

“This project is badly needed, you know that people,” said Galligan.

“Come on, this is your town. Stop making us look like we’re scum and treat us with dignity.” 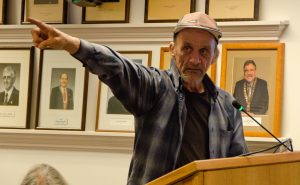 Robert Galligan is pictured while speaking at the public hearing for a housing project in Courtenay on May 22nd, 2018. Photo by James Wood/98.9 The Goat/Vista Radio

City staff will be compiling all the feedback from the hearing in the next two to three weeks, in order to create a report for council. The proposal will then be debated at the next meeting of city council.7

Mayor Larry Jangula believed that the concerns laid out at the meeting will be rectified “to a degree” in the weeks to come.

According to city administration, there are no other lands within the City of Courtenay that would be suitable for the project.