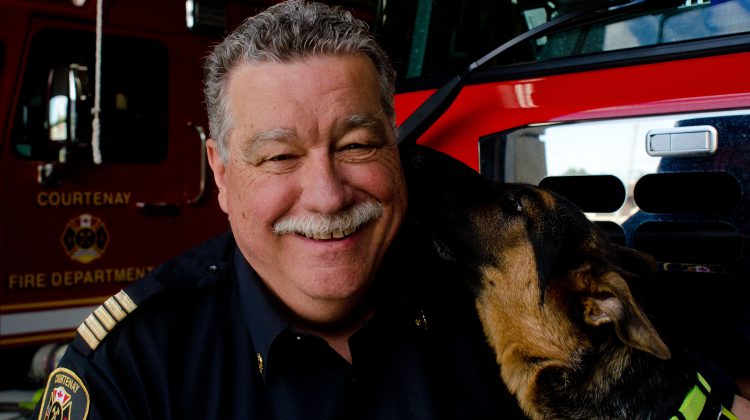 Courtenay fire chief Don Bardonnex is pictured at the fire hall with his German Shepherd therapy dog, Gunny, on May 28th, 2018. Photo by James Wood/98.9 The Goat/Vista Radio

COURTENAY, B.C- The Courtenay firehall has a new four-footed resident.

An 18-month old German Shepherd, named Gunny, has become the new companion and therapy dog for Courtenay’s fire chief, Don Bardonnex. Bardonnex picked him up ten weeks ago, and Gunny has already been out on a few calls in Bardonnex’s truck, keeping him company while the fire chief does his work.

According to Bardonnex, who spoke about his new friend with MyComoxValleyNow.com on Monday, Gunny, (short for gunnery sergeant) was a gift. On Christmas Day, he had opened up a card from his wife and a present, which contained two dog bones.

Gunny was born eight weeks later at Broomacres in Merville, and was picked up by the Bardonnex’s at 16 pounds. He’s since grown to 48 pounds, outgrowing his first harness, and is at the firehall on a part-time basis with the fire chief.

Bardonnex said that Gunny has become a member of the family, and a big part of his own support system. He suffers from post-traumatic stress disorder (PTSD), and went for treatment last year.

Gunny has been an addition to that treatment process, and Bardonnex indicated he has already been a positive influence.

“To myself, the biggest evidence that we had was after the motorcycle crash on Ryan Road,” said Bardonnex.

“That gave me a lot of issues, and when I got home I just sat on the lawn. My wife opened the door, and he comes trotting up and just sits down, starts crying, glad you’re home that kind of thing, and just snuggles up to you. It was really, really easy to start defusing and grounding yourself, with that. It brings you back to where you are, not where you’ve been.”

Bardonnex indicated that the accident at Ryan Road had brought back memories of past incidents close by.

“(It) wasn’t so much the motorcycle accident, it was what it did,” said Bardonnex.

“The reason it was so hard is when I opened my trauma kit, I looked right over top of it and I could see that cross in front of Tim Hortons, and that just snapped me right back to that accident. His biggest feat for me, at those points, is bringing me back to right here, right now, and being in the moment, which helps you step back from what you’re dealing with.”

The last time Bardonnex had a German Shepheard was eleven years ago, and he said he missed his former dog desperately. He was “really, really” happy to get Gunny, and indicated that the other members of the fire department have been highly supportive of Gunny’s presence at the hall.

He also said that the municipal authourities have been “great” about Gunny, after giving approval for his use as a therapy dog.

Gunny has also been helping members of the public, after Bardonnex brought him out to help calm down some young women who had been involved in a traffic collision near Thrifty’s on Cliffe Avenue in recent weeks.

“One of them saw the pup in the back, and I didn’t want them running into the street, brought the dog over to them, and that calmed the whole situation down with the four girls,” said Bardonnex.

“He doesn’t mind noise. We’ve had him around the trucks outside, the siren doesn’t bother him. The howler siren does, I don’t know why, he starts howling and crying for that one.”

At home, Gunny has his own kennel and a regular bed time, though he did jump into the chief’s bed while he and his wife were away for the May long weekend in their fifth wheel. His wife wasn’t too pleased at the time.

“There’s an old joke out there,” said Bardonnex.

“How do you know if your girlfriend or your dog loves you the most? Lock them both in a truck for an hour, when you open it up see which one kisses you. My point with that is, it doesn’t matter what happens, how bad a day you have. It takes us a lifetime to learn how to love somebody, they know it right from the get go. It doesn’t matter what happens, he’s ecstatic when I come home, and he’s a member of the family.”

He also had a message for the public about roadside memorials, after mentioning the site along Ryan Road.

“I get that for the first while it should be there, but it really has a negative effect on the responders that went there to help that day,” said Bardonnex.

As for whether or not members of the public are allowed to come and say hi to his dog, Bardonnex said they should ask permission from him first.

He also would recommend a therapy dog for anyone who is a “dog person”.

“You don’t have to explain anything to a dog,” said Bardonnex.

“They can just sense you.” Courtenay fire chief Don Bardonnex is pictured at the fire hall with his German Shepherd therapy dog, Gunny, on May 28th, 2018. Photo by James Wood/98.9 The Goat/Vista Radio