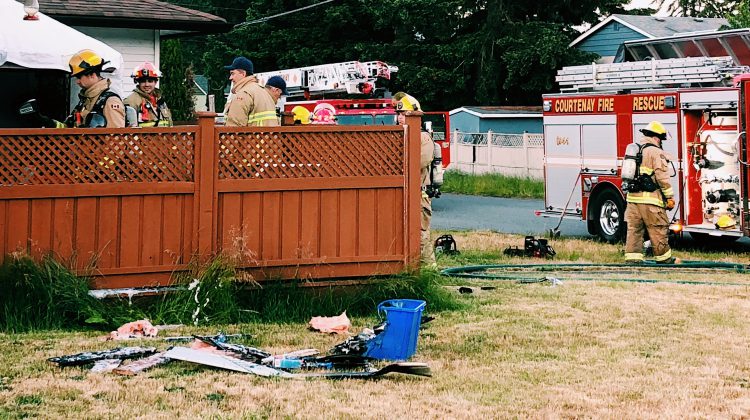 Courtenay firefighters pack up after a recycling bin fire in west-end Courtenay on June 3rd, 2018. Photo by James Wood/98.9 The Goat/Vista Radio

COURTENAY, B.C- A resident of west-end Courtenay has a minor injury after a small fire on Sunday night.

Firefighters responded to a house near the intersection of Grant Avenue and 23rd Street around 8:45 p.m. According to Courtenay deputy fire chief Kurt MacDonald, a call had come in about a structure fire at the residence.

A smouldering, melted recycling bin was found on the house’s front deck, with a scorch mark running up the outside of the front wall. MacDonald indicated that the fire was knocked down by the time firefighters had arrived, though the homeowner had suffered a minor injury to her hand in the process.

As for a cause for the fire, MacDonald stated it was unknown.

“We’re going to take a look at it,” said MacDonald.

“Definitely, a strange place for a fire to start, but not suspicious. It could be from smoking, more than likely it looks like it had something to do with it. We’ll know more when we look at it tomorrow.”

He also had advice for residents when it came to flammable objects in recycling bins.

“Try to keep them away from sources of ignition,” said MacDonald.

“I know that we have to put our recycling, and cardboard, and whatnot in areas so it can be picked up on our garbage days, but you definitely don’t want to be storing it in areas next to BBQ’s, or areas where you’re smoking, things like that. You want to keep them away from sources of ignition, for sure.”

A total of three engines and 20 firefighters came to the scene, and no other injuries were reported.