Police investigating after home shot at near Hobson Park 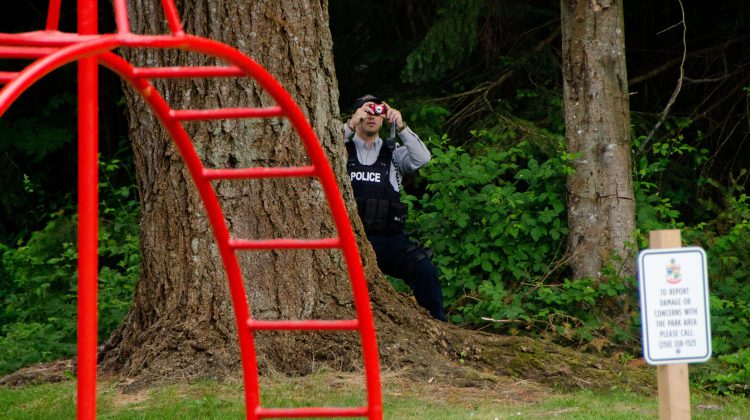 A member of the Comox Valley RCMP photographs the scene of a shooting in the Hobson Park area on June 2nd, 2018. Photo by James Wood/98.9 The Goat/Vista Radio

COURTENAY, B.C- The Comox Valley RCMP are looking into a shooting near Hobson Park over the weekend.

According to a news release from the detachment, multiple reports came in about a shot being fired near the park in east-end Courtenay on Friday night, around 11:20 p.m.

Officers went to the area, and spoke with residents. After walking through the park and surrounding streets, no other evidence was found of the shooting.

The following day, a resident of the area told police they had found a bullet in the outside wall of their residence.

A large police presence in the park and in the surrounding area was observed the same day, while officers investigated the scene. While particular focus was on the woods in the park, officers ultimately left the scene without taping anything off on Saturday.

No one was injured in the shooting and no suspects have been found or identified at this time. Police don’t believe the home damaged was the target of the shot.

“The Comox Valley RCMP are continuing their investigation and are seeking any witnesses to this shot being fired,” read the RCMP statement.

“Police are requesting that residents in the area of Hobson Park check any home surveillance footage, and advise of any suspicious people or vehicles that were in the area at the time.”

If you wish to remain anonymous, you can call Crime Stoppers at 1-800-222-8477 (TIPS) or online at http://comoxvalleycrimestoppers.bc.ca/.