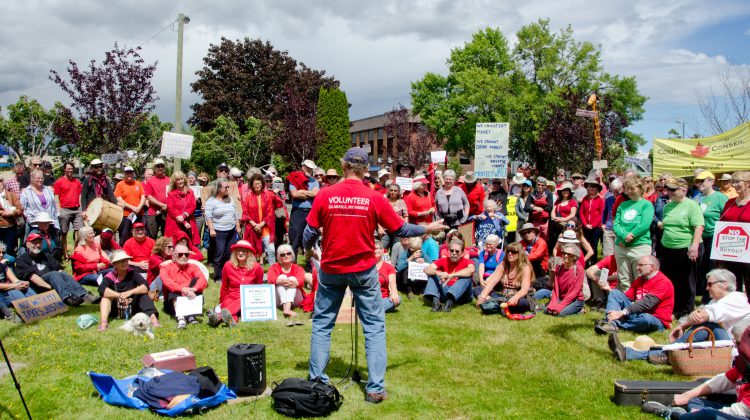 The actions, which occurred in multiple B.C communities, were part of a “snap action” undertaken by Leadnow, a Canadian advocacy group. According to a news release issued by the group, more than 100 rallies took place throughout Canada, with a focus on the planned purchase of the Kinder Morgan pipeline project by the federal government.

One protest in Courtenay drew out around 200 people, outside the local courthouse. Organizer Peggy Zimmerman said she was happy with the turnout, after having a call come in for the event last Thursday.

She believed the group’s message against the pipeline was being heard in the Comox Valley. As for anyone in support of the pipeline, Zimmerman asked them to “look at the facts”, citing union opposition to the project. UNIFOR, a major labour union in Canada, has previously argued against the line.

“Look at the figures,” said Zimmerman.

“We’ve got two leading labour unions that are against this pipeline, because it’s actually going to cost jobs, net-wise, and this includes the largest oil sands labour union located in Alberta.”

She was also concerned about the possibility of a spill, considering it inevitable, and vocally opposed the government’s plan to buy the line for $4.5 billion.

The line, when built, will increase the daily capacity of the Trans Mountain lines to 890,000 barrels per day, with increased access to the west coast of the United States and Northeast Asia. The total project cost is around $7.4 billion, according to the company.