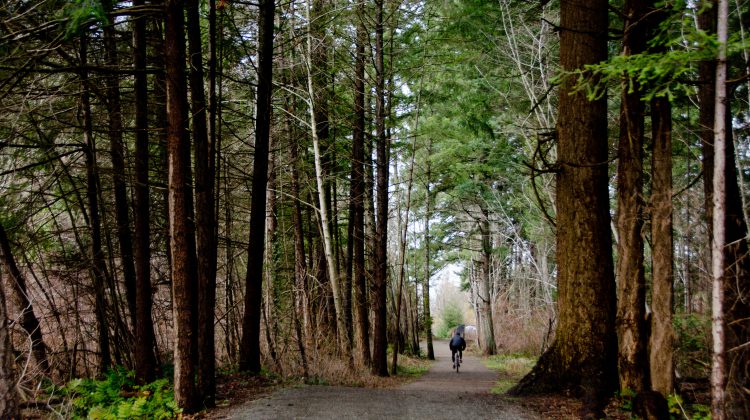 The Rotary Trail is pictured in a Vista Radio file photo from February of 2018. Photo by James Wood/98.9 The Goat/Vista Radio

COURTENAY, B.C- The Comox Valley RCMP are looking for a man who attacked a woman along a popular trail in west-end Courtenay.

According to a release from the detachment, the incident occurred on June 3, around 2 p.m. A woman had been walking along the Rotary Trail when she was assaulted by an unknown man in his 20’s, who had been riding a dirt bike.

“The woman reported that she was walking along the trail with her daughter when she became upset about a man on a dirt bike who was going too fast on the trail,” read the police statement.

“She yelled at the man who then allegedly drove into her and hit her leg before he punched her, kicked her and then threw her phone.  The woman went home and called the police.”

The suspect is described as a white man with blonde hair and blue eyes, standing five feet and seven inches tall, with a medium build. He had been wearing a white and black helmet, with a black hoodie, riding a red and black Honda dirt bike.

“There was another man who was with the suspect,” said Constable Monika Terragni, spokesperson for the detachment.

“We are hoping to hear from this man, or any witnesses who saw these men in the area.”

If they wish to remain anonymous, they can call Crime Stoppers at 1-800-222-8477 (TIPS) or online at http://comoxvalleycrimestoppers.bc.ca/.