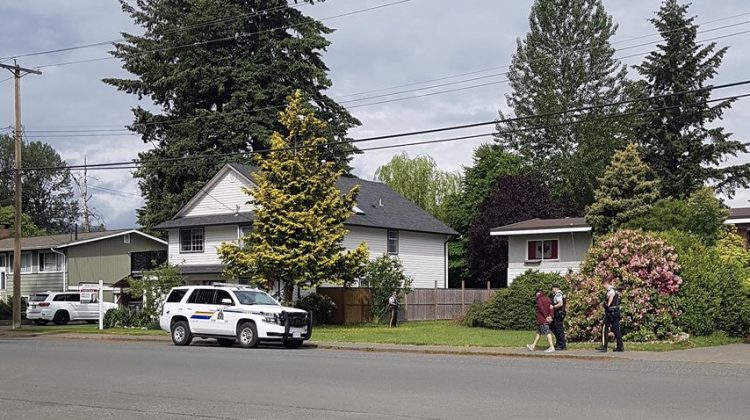 Justin Hedican is arrested near a home along 20th Street on June 3. The homes are frequently visited by police. Image courtesy of Kathy Poulin.

COURTENAY, B.C- Police in the Comox Valley are looking to partner up with a local landlord and municipal authorities when it comes to two houses in west-end Courtenay.

The two homes, located along 20th Street, have become well-known to local residents due to high traffic and frequent visits by police. In a statement issued on Monday, the Valley’s RCMP detachment touched on how officers have been handling the homes.

“The police are attending these houses on a regular basis and investigations are being, and have been conducted by members of the Comox Valley RCMP,” read a statement supplied by Constable Monika Terragni, the spokesperson for the local detachment.

“Often, these houses are ‘flop’ houses where community members with addiction issues gravitate, causing social issues that fall into our laps and impact the neighbours.  The Comox Valley RCMP are working within the framework of the Criminal Code and the Controlled Drugs and Substances Act to address the issues at these residences.  When police attend these residences and find evidence that an offence that has been committed, it is investigated, charges are recommended and it goes to court.  The police do not have the authority to evict someone from their residence.”

The statement also indicated that the detachment is looking to “work in partnership” with the City of Courtenay and the landlord of the two homes, to “alleviate some of the problems that have been identified.”

In addition to the statement, officers have been going by both homes on a frequent basis in the past three weeks. When asked if that was a focused crackdown on the homes, Terragni had the following response.

“We investigate all of the complaints called in by residents and we often focus our patrols in areas where we get the most calls,” said Terragni.

Anyone who sees anything suspicious in the area is asked to call the police.