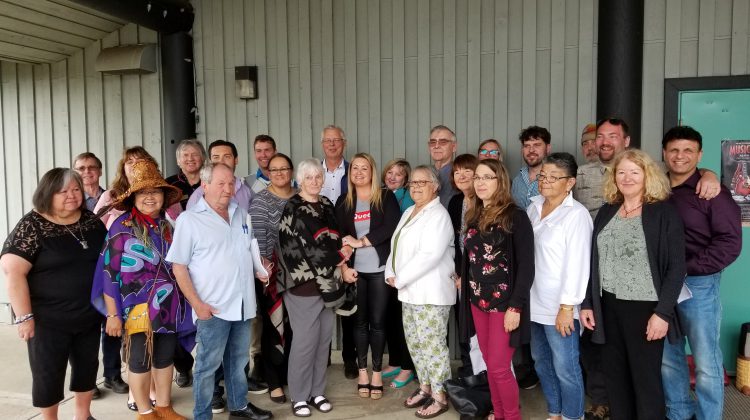 Those were the themes of a two-day event hosted by the K’omoks First Nation (KFN) this week. The forum, titled Moving Forward, wrapped up earlier today.

“It came together because the K’omoks First Nation has been involved in treaty negotiations for 20-plus years now,” said KFN Councillor, Melissa Quocksister.

“A lot of what we find at the negotiating table is that we come up to road blocks while negotiating with the province and with Canada.”

She explained that some of those roadblocks pertain to local issues.

Quocksister said the KFN came up with the idea to set up a series of meeting with local governments to share information and build relationships.

“That’s really what everything comes down to in the end, is that relationship between our nation and the local governments and municipalities,” she said.

She explained that the KFN applied for funding and was approved in January to put together a series of three meetings.

“The first two meetings were individual with each municipality. There was an opportunity at that first meeting for the local governments and municipalities to share with us whatever they thought we needed to know about them,” she said.

This gave the KFN to learn more about local government operations and issues. She said the nation also spoke to local officials about its history and governance structure.

“At the top of our structure is our members, and then its Chief and Council and then flowing down from there. So that’s the one fundamental difference between our structure and a local government structure,” she explained.

This week’s two-day event was a way to expand on that, and talk about other issues treaty issues and reconciliation.

“We have been taking the time to really explain what the treaty process is all about, and what that could look like for the (Comox) Valley and share that with them so that they can wrap their minds around that and start doing some planning of their own to incorporate those changes in the future,” she said.

Government agencies that took part included the City of Courtenay, Town of Comox, Village of Cumberland, the Comox Valley Regional District, Village of Sayward and the Strathcona Regional District. Guest speakers for the event included Hegus (Chief) Clint Williams of the Tla’amin Nation, Mayor David Formosa of Powell River and Councillor John Jack of the Huu-ay-aht First Nation and Chair of the Alberni-Clayoquot Regional District.

“I think, based on the first two sessions, we all had a pretty good understanding of what we were aiming for in the end, this theme of moving forward together,” said K’omoks First Nation Chief Nicole Rempel.

“Developing that vision, which was one of the activities we did today, in developing that together, is something we can all buy into and work forward to.”

Quocksister said the event went “according to plan.”

“I think the greatest take away was our discussions on reconciliation and what that means,” she said.

“We specifically talked about what reconciliation means to us as municipalities, as groups, as individuals and as a greater community. There are a lot of different ideas of what it means. Is it words? Is it action? Is it a feeling? It’s all of those things.”

Quocksister said it was very meaningful to see so many officials on hand for the event and joining in on the discussion.

“The reason these sessions were so successful was because of the participation, that everybody showed up and participated, with the right mindset moving forward and having a successful outcome in the end made all the difference,” said KFN Councillor Josh Frank.

“I think if there was any fear going into it, we kind of resolved that through educating them on who we are and what we’re about. It was not so much a fear, but just a lack of understanding.”

Rempel noted that having difficult conversation early on as part of the event was really important.

“The only way to do that is to work together.”

Quocksister added that the consensus was to continue these types of meetings, with the possibility of offering them on a rotating basis, with different First Nations and local governments hosting the informational sessions.

“We didn’t want to just get together, create some sort of protocol and then just put it on the shelf and forget about it,” said Frank.

“We really wanted to get in the room face to face and build a relationship as opposed to a document that will sit on the shelf.”