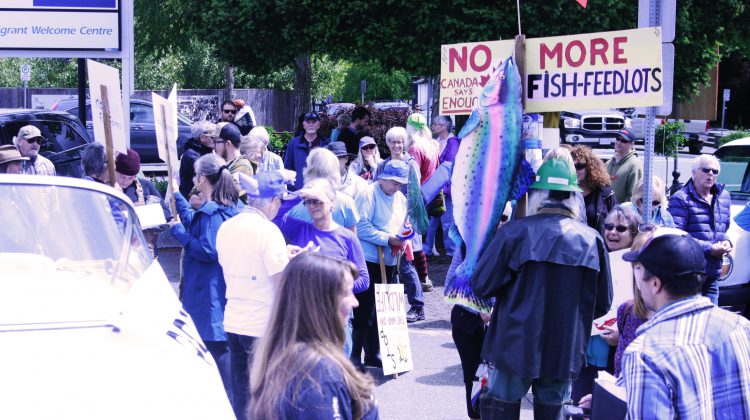 Rally attendees on June 13, 2018 are pictured during the event in a photo supplied by Stan Proboszcz, the event organizer.

COURTENAY, B.C- A brief rally against North Island fish farms was held in Courtenay this afternoon.

During the rally, which was held around 12 p.m., around 150 people came out to the corner of 5th Street and England Avenue. Stan Proboszcz, who organized the event, was pleased with the turnout, after only 75 people had indicated they would be coming out.

The rally was one of five across the province at different MLA offices, according to Proboszcz, and lasted around an hour. The focus was spreading a message to the provincial government.

“People have had enough of the open net, salmon farming industry,” said Proboszcz.

“The province has a decision to make on June 20th, whereby they either renew provincial licenses for 20 farms in the Broughton Archipelago, or let them lapse, and we’re urging the provincial government to let those licenses lapse.”

Proboszcz also stated that there were no activists at the event, only “everyday people” who care about wild salmon.

The rallies were organized by the Watershed Watch Salmon Society, a charity that advocates for the conservation of BC’s wild salmon.