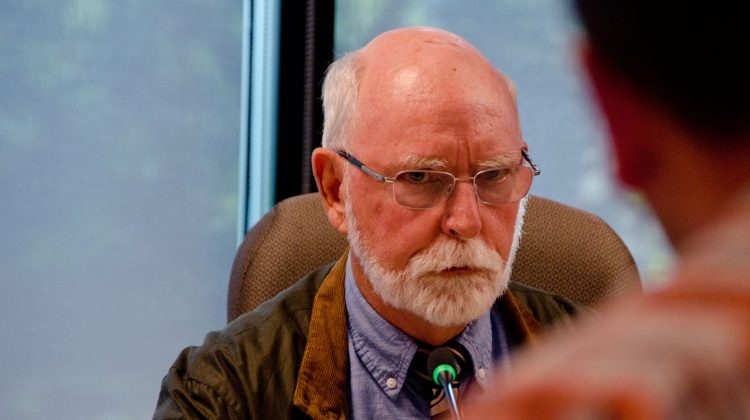 Councillor Doug Hillian is pictured in a photo from the council meeting on June 11th, 2018. Photo by James Wood/98.9 The Goat/Vista Radio

COURTENAY, B.C- The police in the Comox Valley want to deal with two homes in west-end Courtenay that have been sources of trouble.

Earlier this week, the local RCMP detachment indicated that they’re looking to work with the City of Courtenay and the landlord of two homes along 20th Street in Courtenay, after the homes have been the subject of multiple complaints from nearby residents.

Police officers are frequently called to the area, with complaints of drug activity and criminal behavior at the homes circulating throughout the community and multiple arrests made in recent weeks.

Constable Monika Terragni, the spokesperson for the Comox Valley RCMP, stated that the detachment is looking to expand their toolbox by working with the municipal government and the landlord.

According to Terragni, it would be possible to approach the houses from a different angle by getting the other parties involved

“There are communities who have a “nuisance property” bylaw which essentially allows the community to charge back the cost of police services / fire services to the owner of the residence or impose fines for all the nuisance calls,” said Terragni.

“The police may work with the landlord to bring these issues to light and determine if the landlord has an appetite to deal with these issues using the Residential Tenancy Act.  We want residents to feel safe and we will continue to look for opportunities to reduce crime, with patrols and by developing valuable partnerships in the community.”

When asked about the police statement after Monday’s meeting of city council, councillor Doug Hillian was in favour of the idea, citing the appearance of “problem houses” from time to time.

“I would certainly support the city working with the police to make our neighbourhoods as safe as they can be.”

According to a report from the Comox Valley Record, the landlord of one of the properties at 2310-20 Street has applied to the city for rezoning of the property, in order to renovate the existing house and build a second structure, then sell off both lots.

The city has not yet approved any rezoning.