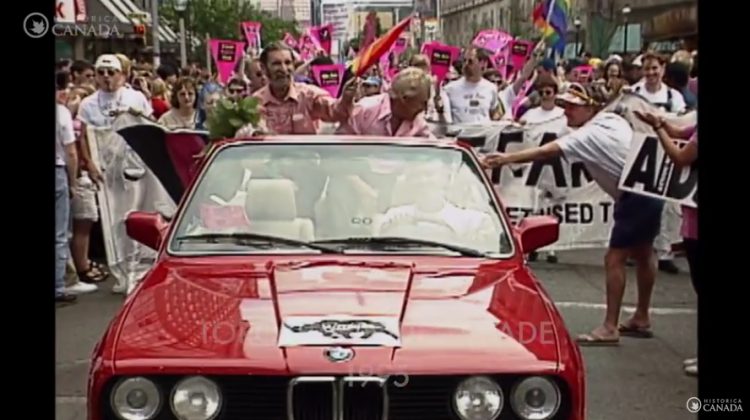 Egan and Nesbit are pictured in a screenshot from the Heritage Minute.

Egan and his partner, Jack Nesbit, are the subjects of a new Heritage Minute released by Historica Canada, with the piece focusing on Egan’s activism for gay rights.

Egan was born in Toronto in 1921, and passed away in Courtenay in 2000, the same year as his partner. Throughout his life, he had been an outspoken activist for gay rights in Canada. He began with the publication of letters in the 1960’s press, becoming one of the first openly gay writers in the media at the time.

Both Egan and Nesbit moved to British Columbia in the 60’s, making a home in Courtenay. Egan was later elected to the board of directors for the Comox-Strathcona Regional District, holding a seat from 1981 to 1993.

The couple co-founded the Valley’s chapter of the Island Gay Society, and Egan served as president of the North Island AIDS Coalition in 1994.

The Heritage minute covers the couple’s initial meeting, and the Supreme Court challenge they became widely known for. Egan had challenged the denial of his spousal benefits to Nesbit due to his sexual orientation, while both lived in the Valley.

Despite the court loss of the challenge, both men served as grand marshals in the 1995 Pride Parade in Toronto following the fight.

The Heritage Minute can be viewed at https://www.historicacanada.ca/Home.