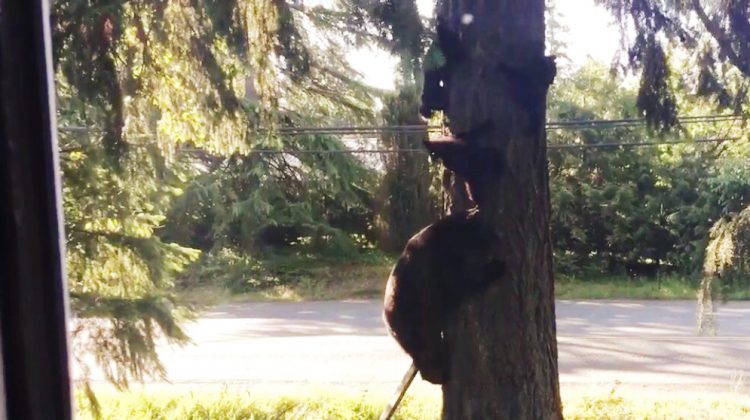 The four bears are pictured in a frame from a video sent to 98.9 The Goat by Karen Freiheit.

COURTENAY, B.C- Residents in the Lake Trail area had a close encounter with four bears this morning.

Terry Freiheit, a homeowner near the intersection of Lake Trail and Arden Road, spotted a female bear with three cubs up the tree outside his house this morning, while drinking his morning coffee. The animals came to his attention after his cat wouldn’t stop looking up the tee.

A conservation officer was called to the scene, and Freiheit indicated that the officer found garbage left outside nearby homes.

“Someone had left their garbage out overnight, and that’s what attracted the mother,” said Freiheit.

“He wasn’t too happy about that, I’ll tell you that.”

Steve Petrovic, a conservation officer in the North Island Zone, had been the one called to the scene. He indicated that a call came in after the bears were spotted moving in and out of yards near Arden Elementary, eventually climbing up a tree close to Lake Trail Road.

Petrovic stated that the timing of the incident was concerning, due to students headed to school in the area. On his arrival, the bears were still up the tree, and he saw that there was garbage accessible at a few of the residences nearby.

“If a person is found to be irresponsible, leaving food attractants out and accessible, by that I mean domestic garbage, dirty recycling, things of that nature, a person can be subject to a fine of 230 dollars under the Wildlife Act, for attracting dangerous animals to a neighbourhood or to a community,” said Petrovic.

He took two actions, with a written warning provided to one residence and advice given at another. While he was at the scene, the bears descended the tree and entered more yards.

Through a combination of instructing a neighbour to lock up their dog so the mother and her cubs could re-unite and yelling, Petrovic eventually pushed the bears out of the neighbourhood and into the green space near Arden Elementary.

He stated that there was no tranquilizing and no “hands-on” during the call, and neighbours in the area are now watching for any return of the bears. Arden Elementary also restricted access to their fields west-end, with noon-hour chaperones keeping an eye on the fence line.

One of the properties Petrovic visited may be facing more consequences if his instructions are not followed, and he’s reached out to the principals of Arden Elementary and Lake Trail School, asking for bear awareness literature to be sent out to families.

“Garbage seems to be a common theme,” said Petrovic.

“Garbage can only go out and be accessible the morning of pickup, not the night before, and not at any other time. It must be stored in a secure manner, so a bear is not able to gain access.”

He also urged anyone who has an encounter with a wild animal in a confined urban space, without an escape route to nature, to immediately call the conservation service.