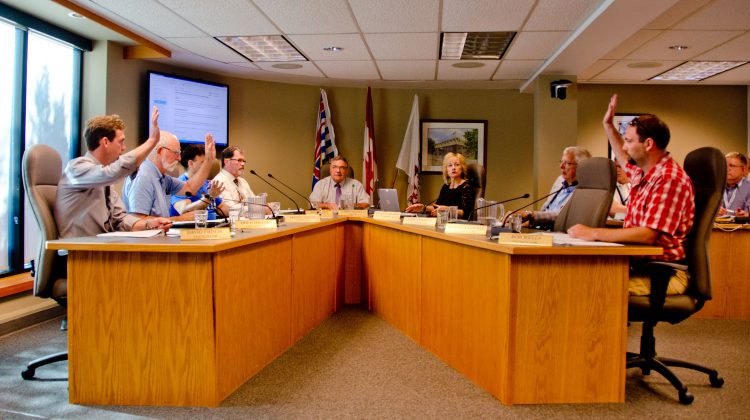 Courtenay city council members vote in favour of first and second reading of a bylaw outlining cannabis sales in the city on June 18th. 2018. Photo by James Wood/98.9 The Goat/Vista Radio

The number is part of a framework being put together by City of Courtenay staff, which was presented to council on Monday evening.

While the city is taking the same direction as the Town of Comox and the Comox Valley Regional District (CVRD) with a planned restriction on marijuana retail, the community is the first to lay out the number of planned businesses within their boundaries.

Under the policy outlined during the council meeting, retail marijuana sales would only be considered in established retail locations. The businesses need to be at least 300 metres away from the nearest school, including the Comox Valley Child Development Association, and 400 metres away from the nearest lot where another marijuana retailer is active.

Sales of the plant would not be allowed at special events, public events, or farmers market, and only one marijuana retailer would be allowed per lot. The maximum number outlined by the policy was five shops for the entire city.

The policy also indicated that the Downtown Courtenay Business Improvement Association would support dispensaries in the city’s downtown area, but with a limit of three shops, though the opinion among the membership was not unanimous.

“The discretion in the proposed policy framework is designed to take into consideration concerns of immediate neighbours in the decision making process,” read the policy.

After discussion on the proposed policy, council gave it two readings and moved it to a public hearing on July 3. There had been disagreement amongst the councillors, resulting in a vote of 5-2 with Mayor Larry Jangula and councillor Erik Eriksson voting against approval due to their opposition to an “open house”, which wasn’t chosen by council.

After the meeting concluded, Mayor Larry Jangula said he believed that the bylaw was good, and praised staff for a “good job on this one”. He focused on the rules being laid out on the shop locations, citing Vancouver’s grey-market dispensaries as an example he wanted to avoid.

“They have more of them then they have Starbucks coffeeshops, apparently they had 92 of them,” said Jangula.

He believed that the bylaw would be good for the city.

“I think you have to have some rules,” said Jangula.

“If you don’t have a bylaw, and you don’t have some rules, we could have 30 or 40 of these dispensaries. I don’t think that is going to be a benefit to anyone.”

However, he did express some concern about the supply of marijuana being sold, voicing a desire to have retailers buying from a centralized source.

“The problem with it is, if you’re perhaps a fly by night operator and you have an operation, what’s to say you’re not going to mix in your own product that you’ve purchased that you grow yourself, and not run it through the books,” said Jangula.

“The product that comes from the provincial government is monitored, and they have to account for that, and that includes taxes.”

He also wanted to see municipalities get a larger chunk of the tax revenue from marijuana sales.

“This all very great for the province and the feds to decide they’re going to split the revenue, but what about the municipalities that end up with all the downstream problems?” said Jangula.

“There is no revenue for us.”

The bylaw has not yet been fully approved by council. The full report can be seen here.