Casino upgrades to create 50-plus jobs in the Comox Valley 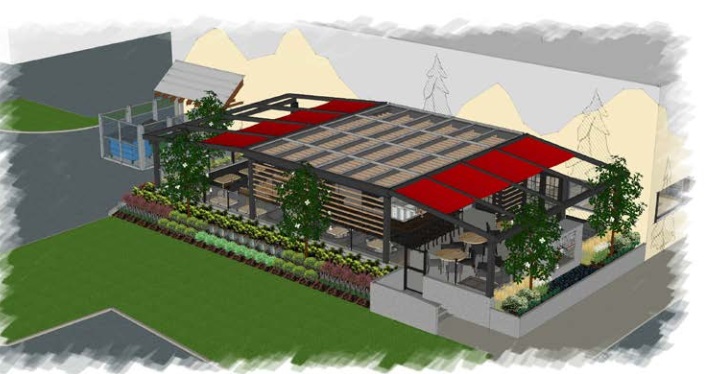 A draft image of the patio expansion, sourced from the Courtenay city council agenda from March 19, 2018.

COURTENAY, B.C. – Renovations are coming along at the Chances Playtime casino.

Upgrades have been in the works since last October, and now, work on the interior is wrapping up, according to Kent Hockley.

Hockley is the Regional Manager for Gateway Casinos and Entertainment for Vancouver Island.

“We’re about to launch our ninth Match Eatery and Public House to British Columbia and our second on Vancouver Island,” he said.

Last week, Gateway Casinos hosted the grand opening for its first eatery on the island, in Campbell River.

Hockley said renovations at the Courtenay facility should be completed by September. Work is currently being done on the outdoor patio.

“In Campbell River, our patio and everything is complete, but unfortunately we still have a few little things to take care of (in Courtenay) and we believe that patio should be wrapped up by mid-September,” he explained.

“They’re just doing the final touches of the interior and we’re in the middle of our dry runs right now, so all the training is going on.”

Hockley noted that so far, 45 new jobs have been created in light of the renovations.

Hockley said Vancouver Island band Monkey Wrench will serve as the eatery’s house band, and the upgrades to the facility will help boost the entertainment sector in the Comox Valley.

“We’re really raising the bar for the entertainment and the atmosphere for people to be able to come out and enjoy a great time.”

The liquor license for the Courtenay patio still needs to be approved.